One of these treasures doesn't belong: 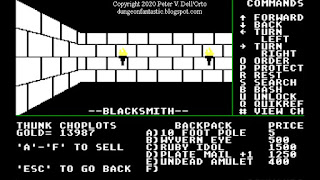 I have to hand it to Might & Magic I here. I'd forgotten that they had 10' poles as loot. They don't seem to do anything - you can't equip them, and the (U)se command does nothing.

Maybe it's a quest item . . . some items seem to be. If garlic, belladonna, and wolfsbane do anything except satisfy a quest chain designed to get you to move around the map . . . I don't know. They don't seem to be.
When I last mentioned the game, I was really hurting for cash. I was constantly broke, barely able to afford food and had to re-load when I found a cursed item because I was too broke to conceive of finding enough cash to remove it.

Basically, I spent a fair amount of time grinding. I got killed a number of times, and had to re-start from my last save (a native feature of the game.) I lost a lot of time when I'd get massacred by some wandering monsters before I could save.

But once I got rolling, it was fine. I got just high enough level to beat a group of wyverns over at the Wyvern Peaks and survive to rest and replenish. So then I could repeat that. The wyverns were worth a substantial amount of xp - 1333 - 2333, most of the time - and dropped between 300-700 gp per character per fight. I went from "slow level raise" and "broke" to going up a levels quickly and accumulating a 150,000 gp in no time.

I played before a long time ago, so I know that a) there was a castle with a fountain that converts gp to xp, and b) it was Castle Dragadune, and c) where to go to get to said castle.

So I did. My first time I spread the gold out, which leveled everyone. From then on, I built up some gold and then went back and dumped it all on my cleric. Once the cleric was level 14 and had the 7th-level spells that max out the game, I did the same with the wizard. Once they were both level 14, I did a few runs to fill out my gold, used the Duplication spell to copy a few useful magic items out to the group, and then started in on more quest-like things:

- Discovering the secret of Portsmith.

Now I'm chasing down clues since I'm strong enough that the monsters I was grinding off of have started to flee from me.

So, so much note-taking in this game. At least these days I can just take a screenshot or a picture of the screen with my phone. Fun stuff. If they only had Gems to (P)eer in Ultima style it would be save me time remembering how to get around.
Posted by Peter D at 1:26 PM