This is a grab-bag of rules decisions I've made either in the past, or recently and will use going forward, for my current Dungeon Fantasy campaign. I'll use these two by default in other, non-DF games as well.

One thing about DR in GURPS, and a one-second timescale, is that flame just isn't a big deal even with light low-tech armor. Against armor designed to deal with the threats PCs face, it's usually a non-issue unless it's a supernatural effect.

Even then, generally it only matters if you set someone on fire, and to do that you need a fair amount of damage (3+ or 10+, depending on the target.)

Being stuck in fire happens occasionally.

Mostly we get into discussions about how much air there is, how quickly the oxygen will be used up by the fire. But really, people tend to burn on the inside, as well, given a sufficiently hot or large fire or a long enough exposure.

I was reminded of a solution proposed my Mark Langsdorf a couple of years ago on the seemingly defunct blog No School Grognard:

Fire damage in GURPS should probably be reduced to 1d-2 or 1d-3, but being in or on fire should also be treated as an respiratory agent with an onset time of 5 seconds that does 1 bu, resisted by HT, with a symptom of -1 HT at 1/3 HP damage and -2 HT at 2/3 HP damage. Fire respiratory damage would also be cyclic for every 5 seconds as long as the victim is in or on fire.

- from It came from the GURPS forums: Low-Tech armor and fire damage

I think that would be a good way to handle it - I'll keep the fire damage the same as in the rules, just so I don't have to hunt down references, but adding the 1 burning injury respiratory effect is good. To put it in easier-to-read format:


Of course, Resist Fire helps normally, even against these kinds of burns. It doesn't help with smoke inhalation, however.

Overall: I think this probably favors the PCs a little bit, since they're the most likely to confine people in fires and use fire as a weapon routinely. It shouldn't be a big change, but it will matter for high-DR PCs and foes who are on fire and just ignore it.

(Morbidly, I was prompted to think about this by asking a kickboxing buddy, who I saw shirtless for the first time close up, about a scar. Turns out it - and others - were from being engulfed in flame when he was a young child.)

Recently we've had some issues where PCs were facing a cone effect that used Large-Area Injury (p. B400). The question is, what if eyes is your lowest DR?

A lot of PCs have exposed faces, because they don't want to deal with vision and hearing penalties. They're easy - face DR is usually low (generally 0). What about those guys head-to-toe in plate armor, but who have 0 DR eyes on their eyeslits?

And Shirtless savage barbarians, too, have "Tough Skin" that doesn't presumably include eyes. (Maybe it does, by a literal reading of the rules, but eyes aren't skin, so you can also ready it literally and call them DR 0, too.)

What to do for them?

My ruling is that in most cases, DR is the torso and the weakest exposed area, including the eyes. Flames, slivers of ice, negative energy waves, acid gouts, heat rays, etc. should affect the eyes. 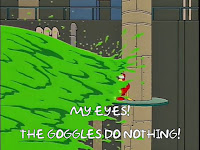 However, in certain circumstances, the Large-Area Injury will not include eyes. This may be because of a specific type of effect that couldn't reasonably hit them, or because of the position and protection of the PCs (possibly having time to preemptively react by covering the eyes, say.)

Overall: I think this is a bit harsh, but it fits the wording of the rule . . . and eye protection shouldn't just be a high-tech way to avoid getting stabbed by a rapier. And it means that barbarians aren't taking DR 7 vs. everything and having it apply universally, large-area or not. Suddenly DR 7 is DR 4 and a high-end Fire Cloud hurts, and a 1d6 flaming explosion in their hex isn't totally ignorable. It just might turn up a 5 or 6 and light you on fire and injure you. I think this doesn't favor the PCs much but it does give another reason to throw explosions around.