We had only a crew of five today, as the Dwarven Sprue took out Low-Key.

- ghost in a closet!

- and another, bigger brawl, with even more fully fanatic freaks!

Sadly we couldn't finish the fight before we had to close up, so we'll wrap the session up next week and hopefully have Low-Key arrive just in time to loot the bodies.

Fun, fun session. Seriously fun. So many MVP moments we had to pick the best of a lot of options - everyone was a potential MVP at least once.

* "That guy's got to be a full fanatic freak or he'd have split town twenty minutes ago!" - Oddball
Posted by Peter D at 8:42 PM No comments:

I'm a bit under the weather, so I didn't do too much at all today. But I did manage to get it all set up.
I:

- restocked the dungeon with foes and treasure and provisions and whatnot. It's been a few weeks since the last time a bunch of murderous hobos bashed their way in.

- updated all of the VTT components that I could

Email ThisBlogThis!Share to TwitterShare to FacebookShare to Pinterest
Labels: Felltower

That said, I did get in some gaming and reading.

- I'm still playing Pathfinder: Kingmaker in bits as I have time here and there. I've missed a quest I did last time, but otherwise have been a lot better about doing things in order and not short-circuiting the process. So I'm more appropriately leveled for my missions. That offends my old school mentality but also means I don't have to reload from saves after I get massacred by monsters as much as before, either. I'm still being very much Lawful Evil and it's fun, especially when I know it's a choice that leads to things I purposely avoided doing before. Plus it's fun to annoy my good-aligned companions. I tend to bring the callous (Amiri, Harrim) and ruthless (Ekundayo) and the evil (Regongar, Nok Nok) with me more often than not.

- I have a table for Fire in the Lake, but I need to get rid of my broken printer first and re-position it. So I should be set up soon for a playthrough - finally!

- I like these cross-edition analysis posts on D&D from Delta. This one is on advancement. I especially love the Gygax quote from The Dragon saying you shouldn't be higher level than their guys because you haven't played as long or as much.

- I think this Back of Beyond wargame is pretty awesome. I keenly await the next installment.
Posted by Peter D at 8:36 PM No comments:

A question came up about Continual Mage Light in DF Felltower.

Does Continual Mage Light count as a "spell on"?

No, it does not, just like Continual Light, although it doesn't specify that. The spell otherwise works as written.
Posted by Peter D at 8:04 PM No comments:

The treaure expectations in video games vs. tabletop games has been on my mind as I re-play Pathfinder: Kingmaker.

From the very start of the game, I expect to find a steady stream of magical items. They'll increase in value, scaled to my current level. I won't find a +5 sword until I'm pretty high level. You're never going to be better armed than your level, even without level-restricted items (like in Diablo, or Borderlands 2.)

On top of that, I expect to find enough items that every possible magic item slot is filled. Have two ring slots? Everyone should end up with two magical rings. Everyone has a magical cloak. Everyone has magical headgear, a necklace, a suit of armor, a pair of magic boots, and magical gloves. Everyone will have 1-2 magical weapons and if they use a shield, a magic shield. Churn of items is not necessarily high, but it continues along, and spares are ruthlessly sold so I can buy better items (or consumables, if your game needs them.) I have no idea what my characters are like at their base stats, because they all have stat boosters. They have so many layered item bonuses I need to actually swap items to figure out which one is better. I have to look things up online to figure out how they interplay because I have so many.

Sure, we ended up with a of magic items during my Unearthed Arcana-era high school AD&D game. But not that many. You'd get that one guy with three rings trying to explain how he could wear them all, but lots of guys with no magic rings. Everyone would have a magic weapon because you need them to fight some foes. But you wouldn't always have one of everything you could use.

Games ramp up the magic items because they're fun to find and use, for one. They also have no consequences outside of the game. You can't really figure out some way to use extra magic weapons to decorate your palace guard with +1 swords and spare Belts of Giant Strength or Rings of Protection. You're just limited.

But I routinely have more magic items on one character than you'd see on a party of 3-4 in all but a semi-legendary Monty Haul style game.

Kingmaker: Sometimes Being Evil Has Benefits

Confronted by angry peasants who want blood because they're not happy with how quickly you're dealing wiht an outbreak of monsters?

Hang every other one of them!

Problem solved in a lot less skill checks and carefully chosen words than my Lawful Good guy needed, for sure.

Will this have consequences? Consequences, shmonsequences. I'll be higher level by the time that happens! Bring it! 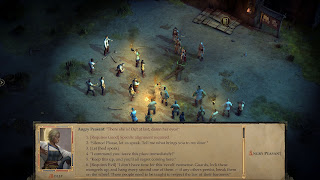 This isn't really a "revised" spell, so much as it is a clarification.

The Choking spell from GURPS Magic, p. 40, works by Suffocation (p. B436). It does not, despite the name of the spell, include any other form of injury or impairment from choking. This specifically does not include Choking as defined on p. 66 of DFRPG Exploits. You cannot breathe or speak, per the spell.

This basically means that you don't get a free stunning effect from this spell. It just works as written. You could make this include the effects of choking, but you'd want to increase the cost - probably to at least 7, maybe 8 points. It's still very dangerous, but not as much as the name - and the condition which was defined long after the spell was named - implies.
Posted by Peter D at 9:32 PM No comments: