I've instantly become a Michael Curtis fan. I initially grabbed his Dungeon Alphabet book on the strength of "$10 is cheap for new Erol Otus artwork" as I'm a big EO fan. After seeing his free previews of Stonehell, I knew I'd have to get it eventually.

For a more OSR/old-school D&D/historical perspective on this book, check out this review over at Grognardia. James does an excellent job outlining its strengths and weaknesses for that sort of use. Naturally, my concern is different - how useful is this if you play GURPS?

This review has mild spoilers for playing Stonehell so if you're adventuring in it, don't read it and aggravate your GM/DM/LL/etc. 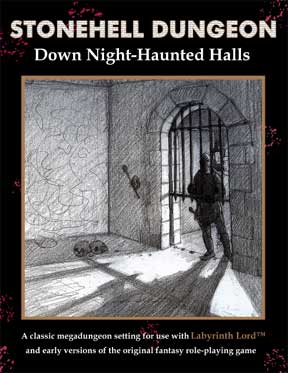 Stonehell Dungeon is a book detailing the first five levels of a megadungeon for the Labyrinth Lord retro-clone rule set. It is written as a fully-realized, ready-to-go dungeon. It's not a kit or a design guide, although you can't help but pick up a few ideas from it.

Stonehell, so the story goes, was a prison on the outskirts of the local ruler's territory. Long story short, lots of prisoners were forced in to dig out their own prison, nobody was let out, and as time went on the dungeons got deeper, critters moved in, and Hideous Things Were Unearthed. Since then the ruler is gone, the dungeon has been occupied, partly cleared, re-occupied, raided, etc. for a good long time. It's the classic Mt. Everest of dungeons - it's there, and although people have gone before, the challenge remains and you can go test your mettle there whenever you like. It's active, so the dungeon will change and its contents will change as its occupants react to your incursions and to each other.

Each level is laid out in a grid pattern, which is both good and bad. The good is it allows mini theme areas and allows for one-page presentation (so you have almost zero page flipping if you stay on one level). The bad is that each level sort of feels like a grid, since areas rarely overlap from one sector to another. You end up really needing to flip around in what feels like a non-intuitive way to find out "where next?" when players drop down a pit, exit a section, or otherwise move around. Some of it is limitations of the medium, and it's at least easy to use the small grid-like levels instead of the poster-sized maps I moaned about in my review of Undermountain. The grid-like layout means you don't get any freaking-huge caverns, bizarre mismatched sublevels, and confusing layers. It's a layer cake. Again, that makes it much simpler for the publisher and pretty easy for the GM. I'm not sure how you square the circle of "crazed and idiosyncratic layout" and "easy to use" however; I'm just pointing out the problem.

If you want to see Stonehell, three of the five levels are available for free, so if you want to see what you're in for when you buy it, check these first. I did and bought it as a result, which just goes to show the power of the free preview.

Overall the dungeon is pretty cool. It has a very "the deeper the more dangerous" approach, so you aren't likely to be ambused by a dozen beholders on level 1 because of a bad wandering monsters result. That's a negative to me because I like the risk of totally unbalanced encounters . . . but it's fair enough in a class-and-level game. The dungeon also shows the power of an elevator pitch theme. Stonehell is a former prison where the prisoners Dug Too Deep, and it shows. Everything does kind of tie into that; there isn't anything that says "Now why the hell is this in a prison?" and the oddities are tied in well. The dungeon has a few cool features to either tempt you into going too deep, and to let you bypass easy levels once you get stronger. Once you find the Secret Way to Level Whatever, you can use it instead of fighting freaking kobolds every session.

There are some oddities, though. For example, although tracking encumbrance is optional in LL, it's still strange to have entries with corpses of previous adventures wearing heavy armor and carrying hundreds of pounds of coins (since coins are 10 to the pound). It's also clear that many of the wandering monsters are either singular or come from a limited pool of replacements, but they aren't clearly marked that way. Named unique NPCs are easy to track, but "Spectre (from #7)" or "Kobolds (3d6) (70 total)" would have been nice. In other cases it's clear that you need Magic Item X to beat Monster Y, so naturally Magic Item X is nearby; it's rare for such items to cross sectors. It's even more rare for monsters to hoard, guard, and/or otherwise trap such items. Maybe it's an issue of appropriate challenge but it's just a bit odd and it would likely get remarked on by players. Some are easy explained (maybe the critter doesn't know, or can't leave its room, or whatever), but the adventure doesn't do it.

My experience converting non-GURPS fantasy dungeons to GURPS is that it takes a lot of work to do. You end up needing to change a lot to account for system differences and different underlying assumptions. Stonehell, because of its sheer amount of monsters, treasures, new spells, and magical effects, would require a lot of conversion time. It's probably better to spend that time either re-populating the maps with the text as a guideline or just looting it for ideas. There are a lot of ideas, though, and many well worth stealing shamelessly!

Rating:
Content: 5 out of 5. The dungeon is complete, all the information you need to run it for Labyrinth Lord is there, as far as I can tell. It's also got more than enough information for conversions, too. All without giving you so much you can't make it your own.
Presentation: 4 out of 5. Very attractive. A few typos detract from the presentation, and rather unavoidably you have to flip back and forth from map to details. You can run one section at a time without (much) flipping, though, but the little flips I needed to do were annoying enough. Text is easily readable and pictures (there are few) add to the text rather than just filling layout space.

Overall: If you need a thematically tight, well-written and ready-to-go Labyrinth Lord dungeon for your campaign, you won't go wrong with this one. It's also a good example of a well-done dungeon. It's got a central theme, cool new monsters and treasures, features that harkened back to my Proving Grounds of the Mad Overlord days (die W*E*R*D*N*A, die!), and a lot of sheer coolness packaged in it. If you need a one-book megadungeon for a D&D clone, this will do - although it'll probably take less work to write a new dungeon than convert this to GURPS. Still if you can't steal ideas, maps, and critters from it for game, you just aren't trying very hard. Recommended.
Posted by Peter D at 10:40 AM