- Here is a picture of the 33 druagr advancing on the party, after the Create Fire spell died down. The fallen one in the back got knocked over by accident, it's not a true reflection of the situation. 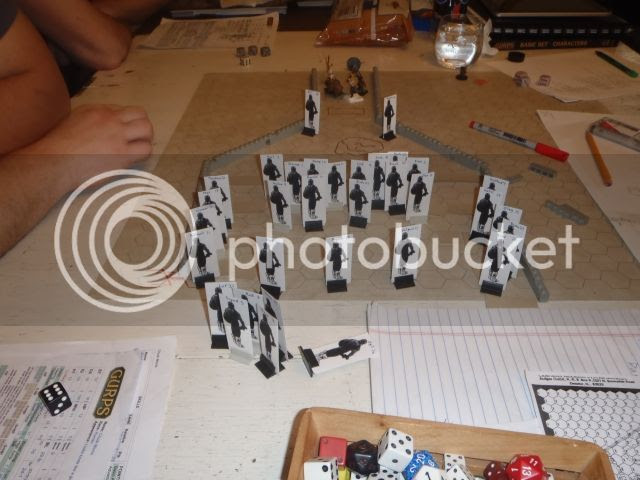 Again, thanks to Bruno for making them for me. Well, drawing them for me, I printed, glued, and based them. Those are my BattleTech boxed set bases and the bases from my Paranoia GM Screen pack.

- Last session was a 2 XP session - no profit (no loot at all, actually) (-1 point), only a tiny bit of meaningless exploration (-2 points), and nothing exciting to report out of it (no bonuses.) Tough day at work.

- We changed alchemist's fire a bit. DF1 says it is a "two hex radius." I made my flaming oil pots the same size. But "two hex radius" is hard to do on a hex map. My players decided extending two hexes out from a centerpoint was too big - it worked to be almost 5 hexes across, with lots of half-hexes of questionable "am I on fire or not?" issues. So we changed it to a 2 area effect, like a spell - so it affects the hex it hits, and the surrounding ones.

- I love the thought process behind "let's throw monster A at monster B," even if they couldn't figure out how to make it work.

- I might have to enforce, or at least suggest, a maximum planning time on my sessions. As in, after 1 hour I'm just going to declare you start heading to the dungeon, and that's that. It was a fun session, but man, it was a long bit of planning.

- there was a brief discussion, never followed through on, of using Illusion Disguise on Chuck Morris to make him look like Baron Sterick the Red and sending him in to talk to the druagr and demand the guy they wanted follow him. Chuck Morris shot it down because he's no actor (it would be at a default, and not a good one, and they know nothing of the Baron's mannerisms, quirks, or way of speaking, which is a further penalty). But it would have been funny. "As you can plainly see, I am your Baron, not some wandering martial artist disguised as him. Obey me!"

- I think they oddly lost sight of the main goal - getting treasure. They really wanted to deal with the druagr and loot them, but it ended up not working and costing so much time they couldn't look for treasure elsewhere.

- My players are firm believers in snaking a victory instead of smashing straight through to one. If there is a clever way around it, they want to find it. If there is any way to make the fight unfair, or completely lopsided in their favor, or beat it with a single spell, they want to try it. Having Wild Talent (Spells only) makes this worse, because it becomes "find the correct spell to unlock this puzzle." They don't like to resort to a fair fight unless they have to. Admirable in general.

But I think sometimes you can overthink a problem, or try to turn a tough fight into a puzzle. Not saying they could or should try to take the druagr straight-up, but it's an example of trying to find a way to use the "rules" of their undead status as a lever to win an easy victory. Throw oil and we win. Send a servant in with no hostile intent and shoot the pot of oil he's holding and we win. Create Earth and use Earth to Stone to put rocks on their sarcophogi so they can't escape and we win. Create a wall they can't get past and shoot them until they die, etc. Again, I'm not saying this is bad behavior, or that charge right in was the right idea (it might be a terrible idea, like the end of Butch Cassidy and the Sundance Kid level of bad idea). But I know from experience sometimes it's possible to get so wrapped up in solving the puzzle that you don't recognize that it's not a puzzle - think of the Gordian Knot.

- One plan revolved around casting Ethereal Body on a druagr. It's not a resisted spell, and I ruled that if there is no listed resistance, the spell is "willing subject only." There was some argument it meant "resist with the better of Will or HT" but I shot that down - way, way, way too many spells become powerful offensive options in that case.

Like I said, just a few notes I wanted to get down somewhere.
Posted by Peter D at 2:30 PM