So I was sorting through my AD&D collection yesterday, looking for these: 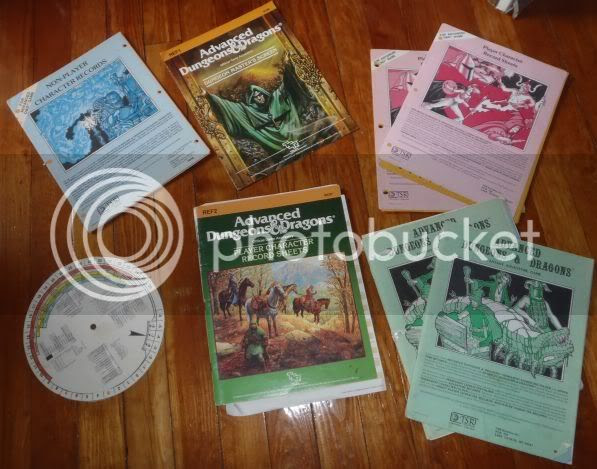 My collection of AD&D record sheets and such. It was in the bag with my tattered bits of my original Rogue's Gallery and my original (and well-used!) Dungeon Master's Adventure Log. Did you know Jack's mage Hana drank an ochre jelly from a vat, thinking it was magical water? I don't remember that, but my cousin's character Vade apparently raised him from the dead. I forgot how high level those guys got - they eventually completed Q1. Anyway.

Also in that pile is the DM's screen cover, which has a quick summary of the various classes and their special abilities (I forgot druids have their own special language. Huh.) And the combat computer from Dragon magazine, which lets you spin out the numbers for weapon vs. AC, class and level and whatever and spits out your "to hit" number.

I don't play AD&D anymore, but a few of these do have really nice Erol Otus covers. I'm debating selling them off on eBay or something like that. They're in working condition, and I'd love to know someone is using them. But my collector side is telling me, hold on to a copy of each if only for the Erol Otus covers.

Are these things hard to find? Would anyone use them, or does everyone make their own sheets nowadays? I'm wondering . . . I don't see any reason for me to hold onto them.
Posted by Peter D at 8:56 AM

Email ThisBlogThis!Share to TwitterShare to FacebookShare to Pinterest
Labels: DnD