Gord the Rogue in Castle Greyhawk

Greyhawk Grognard blogged about the sewers beneath Stoink (and elsewhere) in the very first Gord book by Gary Gygax. Generally, the "Gord the Rogue" books contain a lot of information about Greyhawk. They also generally involve Gord going into some subterranean location in search of a lost artifact or to recover treasure or as a big hexcrawl to a lost city. I can't think of one book that doesn't, actually, although it's not always a big chunk of the book.

But one place he goes is of special interest to Greyhawk fans:

In the story "In the Heart of Darkness," in Night Arrant, Castle Greyhawk is the main setting for the story.

Eneever Zig, a wizard, hires Gord and Chert for an expedition to a secret sub-level of Castle Greyhawk. Before they head out, he gives a little background on the castle:

"It is well known that the labyrinthine dungeon, catacombs, and maze of subterranean passages beneath the ancient castle once held a conglomerate of monsters and a plethora of treasure - all there at the whim of the lord archmage who ruled within. In bygone years many sought to plumb the depth of this underground for glory and riches. And why not? With the master gone, who could say them nay? It's widely known that fabulous beasts and incredible treasures were found and disposed of. Of course, the stream of adventurers bound to become wealthy or die trying was so heavy that not even the fiercest of guardians could forever prevail. Expeditions came, some succeeded, and Greyhawk City grew rich from them. Now, who ventures to the ruins? Few," the wizard said in answer to his own query. "And this is no surprise. Tales told of even greater treasures deep beneath the fallen forteress were shown to be untrue. Vast, empty complexes of passages and chambers, bones, and deserted mazes speak louder than stories told in alehouses."
- Eneever Zig, in Night Arrant, pg. 12-13

Of course, the wizard knows something those searchers didn't, like what's down there and where to look. "Many untouched places remain - crypts laden with gold, chests filled with pearls and gemstones, even magical stuff suitable for swordsman and thief!" Sounds great, sign me up!

Not to spoil it too much, but Zig takes them on a dangerous trip to confront various challenges of the elements, of balance, and of the mind, on their way to attempt to search out a powerful magical item.

The cover picture of the novel depicts Zig (aided by Gord) dealing with one of the challenges they face in the demi-plane of the Element Master. 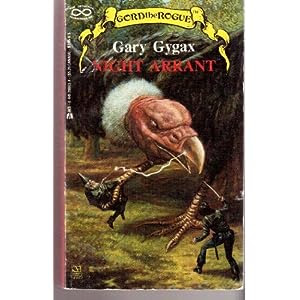 There is even a nice backstory about a previous trip by Gord and Chert. In their previous adventure there, Gord and Chert beat up some bandits and turn them into hirelings, basically, and follow a treasure map into Castle Greyhawk. Yeah, it's that old school - 0-level hirelings.

It also has a nice description of the way to the castle, which otherwise plays little part in Gord's stories:

The once-magnificent castle could be seen from any vantage point in the city. It was on a high hill about three miles away from the northern verge of Greyhawk. The only road, at one time smooth and easily accessible, had slowly deteriorated into little more than a rutted trail [. . .] Local folk shunned the area, claiming that things came forth at night to waylay the unwary. The land surrounding the castle for approximately a mile in any given direction was a tangled wilderness, save for that to the north of the castle's great mound. There lay a great bog with pools said to be bottomless and mires of deadliest sort."
- Night Arrant pg. 15

Bits of this adventure find their way into Dance of Demons, too.

The story is pretty good, actually, and (probably not by accident) comes off a bit like an homage to both Gary Gygax's D&D games and to Fritz Leiber's heroic duo to Fafhrd and the Grey Mouser. It's worth finding the book if you haven't read it. It contains some of the better Gord the Rogue stories. If you're a Greyhawk fan, or just like to know everything Gygax wrote about Castle Greyhawk, track down a copy and read that first story. Lots of it is useable together or elsewhere as a side-trip in your own megadungeon, a quest in a non-dungeon based game, or just as inspiration.
Posted by Peter D at 3:03 PM