We opened as usual in Stericksburg.

The group did their usual routine - hunting down potions, carousing, gathering rumors, and general prep. They also sought out some crossbowmen and shieldbearers, and luckily enough found two of each. They paid them 30sp each for a day's work, and tasked the two shieldbearers with guarding the crossbowmen. We named them based on their minis - a "Hillman" cardboard hero with a spear and a shield became Jon Hillman, the crossbowman with the grey wolf cape on his mini because Grey McCape, etc. Easy enough and amusing enough.

The group learned some interesting rumors - the six-fingered ones are wizard-vampires, and can shoot fire from their fingers ("Which fingers?" "The rumor wasn't specific.")

Before entering the dungeon, Vryce used his dwarven whetstone to put an edge on all of the edged weapons in the group, including both of his greatswords and his flaming broadsword, Raggi's axe and knife, as well as Grey McCape's and Moe Redshirt's backup hatchets and Al's cheap broadsword. They also did light stones for everyone, half done by Nakar and half by Inquisitor Marco in case they hit either a No Mana Zone or a No Sanctity Zone (if there even are any of them).

They also got some padding for their bridge/ladder, which derailed us into a "military boondoggle" sidetrack, discussing how it could be equipped with wheels, shields on arms, smoke dispensers, its own support staff, transport for the support staff, etc. It is rapidly becoming The Best Damn Portable Bridge Ever.

They finally headed up the mountain and into the ruins. A careful approach showed the hobgoblins weren't manning the pillboxes, and the spiked-up and spiked-open doors were still that way. They went that way, again. They passed the noisy room, slowly, cautioning their hired help to keep quiet. It helped. They headed towards the second level stairs by the usual route, but when they reached the secret door they've been using as a "shortcut" (the door into the room with the rats, last session), they heard a low muffled moaning. They determined it was coming from an area they hadn't explored. They decided to check it out. They followed the sound as best they could, and found it coming from behind a door.

They opened the door and saw an empty room, but with the far wall covered with a gold-colored, gemstone-studded framed landscape painting. It showed the mountain they were on, but with an intact fortress on it, of a very different design than the ruined castle, above. Nakar and Inq. Marco moved in to investigate. When they got within a yard, grasping stone arms reached out for them to grab. They escaped easily, Inq. Marco blocking and dodging back, Nakar Phasing and dodging away. A little more investigation traced the moan to a corner, and some spells showed the picture to be an illusion. Nakar dispelled it, and they saw a starving, dehydrated goblin held by two stone arms, a knife at his feet. Nakar cast Levitate on him, and then Vryce chopped the stone arms off (without hitting the goblin - a Skill 23 Weapon Master is a nice thing to have around). Nakar whisked him away. They fed him a little, gave him water, and healed him with their Staff of Healing. To their annoyance, he only spoke goblinese. So they left him with a ration and his knife, outside the reach of the arms. As they left, the illusionary picture returned.

They headed out, exploring new territory, trying to find a new way into the dungeon. This was a change from the original plan of going to level 2 and seeing what they could find, but it worked out.

They quickly found a triangular chamber with a couple slugbeasts in it. Vryce chopped up one, but his sword got stuck in it and began to corrode. Grey McCape and Moe Redshirt shot another one dead with two quarrels. As Vryce struggled to free his sword, Inq. Marco lit it up with Flaming Weapon. That did it easily, burning off the corrosive and sticky slime. But a third, unnoticed slugbeast on the ceiling attacked Vryce and cracked him in the head (useless - his skull is protected by an enchanted greathelm over enchanted mail). He cut that one down, too.

They moved on into another similarly shaped triangular chamber. They briefly investigated a closet off the room, and then found a secret door and a moveable stone in the floor (an obvious trap door). See Secrets highlighted both for Nakar. Inq. Marco figured out the door was meant to be pressed inward, and then it pocketed off to the right. Beyond was another 10 x 10' room, with another secret door on the other side. It opened the same way.

Beyond it was an L-shaped corridor. To the left, the long part of the L, the party could see a spiral staircase up. They investigated, and found it ended in a locked metal trapdoor inside of a metal "tube" that sported climbing rungs. Some checked and then Vryce risking a touch showed them it wasn't trapped, like the one in the tower they knocked down was. They unbolted it with a rotating handle, and sure enough it was held down from above by some enormous weight. They decided it was probably in the right spot relative to the stairs to be the staircase to the tower Nakar "killed" on their first trip.

They checked the corridor out, but decided they'd use Seek Earth to find silver (directly back, behind them) and then gold (same). They figured it was roughly towards the trap door area, so . . . they decided to return to the "trapdoor room."

There, they pried up the stone and looked down. It lead to an L-shaped tunnel, roughly hewn, with clear tool marks (age unknown). Vryce dropped down to investigate. The tunnel was short (about 6' tall at the tallest, sometimes a little shorter), and there was a trapdoor with an iron ring roughly hammered into it as a handle. He went the other way and it, too, short ended in another trapdoor with an iron ring. Vryce returned, and they had a discussion (argument) about if this was a sub-level, a between-levels area, or a way to the second level. In any case, gold was detected the other way, so they headed that way.

They found a corridor out of the trapdoor room ended in a shaped-stone wall. They got ready and Nakar shaped it out of the way, creating a 6' x 3' door. They moved in, and checked doors ahead and to the left. They Magelocked one closed, and then heard shuffling noises - they saw three wights and then a dozen zombies and three skeletons coming at them. So they arrayed themselves to fight while Nakar Magelocked the other door. Inq. Marco turned undead, but while it kept the zombies back 5 yards, it was only enough to keep the wights away from him personally.

Meanwhile, Vryce attacked them, defaulting Broadsword and using his flaming sword. It proved very effective, ignoring whatever anti-weapon defenses of the wights. He chopped up the three pretty quickly, with some help from Raggi after Inq. Marco cast Flaming Weapon on Raggi's axe. The zombies were then assaulted, and were chopped up by Raggi and Vryce while Nakar threw an Explosive Stone Missile into their midst and blew a few apart (and incidentally hit Vryce).

A rattling at the side, Magelocked door alerted them to more trouble. But it stopped soon enough.

After this, they systematically and carefully searched the area. They found a good bit of loot (some gold coins - big and valuable in this game - and an enchanted pair of brass knuckles and some jewelry) and confirmed these were the wights they confronted earlier (in Felltower 2).

After this, they headed through the Magelocked door, and into another similar corridor lined with rooms.

They headed in, and immediately got jumped by silently lurking wights. 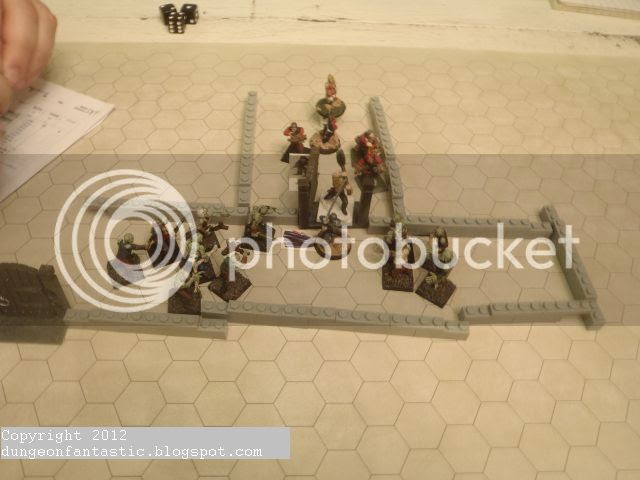 A round dozen of them. A big fight broke out. It was too crowded for any except Vryce and then Raggi to attack. Vryce used his flaming broadsword, and it was effective. Raggi got his sword flamed up by Inq. Marco and started laying into wights, too. The fight wasn't all one sided - Vryce got clawed a few times, and had to resist paralysis, and was knocked down. One wight turned out to be some kind of priest-wight, and used his evil spells to inflict unholy damage on Inq. Marco, who blasted him back with a Sunbolt. Once the other wights were down, Vryce and Raggi chopped up the priest-wight.

More systematic looting later, the group found some more treasure - a search of a storeroom (one of the many identical rooms that were otherwise filled with coffins and ersatz coffins and zombie rot) found them some cumin in a pouch, 12 gallon bottles of rare wine (120 pounds all together), and a rotted-through and rusted sword decorated with a cross-in-circle medallion and leather strips forming a handwrap. They took it off the broken sword, which disintegrated, and it broke into three thinner medal each with one leather strap.

(Editing later: I forgot to mention in here that Vryce investigated some precariously balanced crates. When he touched one, they turned out to be extremely precarious, and full of loose stones. The whole stack came down on him. He tried to dive aside but failed, and took a lot of damage - 23 crushing - and was partly buried under them. They had to pull stone fragments off of him for a while and then heal him up.)

After this, they headed to the surface, checking a nearby (big but empty) room, and then sealing the section off again with Shape Stone. They made it back to the surface from here unmolested.

Back in town, they found they'd scored some good stuff:

- wine worth 30sp a bottle (so 360 sp for the box).
- a unholy symbol of the Black Brotherhood, which they gave to the church for destruction (a reward is promised later).
- a magical, high-quality mace (the one taken by Inq. Marco)
- a pair of magic brass knuckles (an amusing random treasure result, heh - but they sold them)
- three Talismans of Undead Slaying. Each is worth +1 damage against undead, and you can mount up to three on a weapon. If all three are on there, another further effect is had against undead. However, they can't be removed; if you want them off you must destroy the weapon utterly (beyond any hope of repair or restoration). They're debating who to give them to, but they've decided it's worth loading them all up on one weapon.

They even gave their NPCs a 15sp bonus each, in the hopes it'll help them get more NPCs next time they want them.

Good session, and they're talking about coming back, clearing the rubble off that trap door, and then trying to open it (now that it's unlocked from below, even if potentially still trapped).
Posted by Peter D at 10:45 PM