Monster Ecology: Pulling It Together

Pulling it all together

In each of the parts 1, 2, and 3 of this series, I describe a half-dozen ways a monster might eat, originate, and reproduce. Now I'll try an example.

While I could just pick out a race and pick results - and I probably would - just for fun I'm going to try rolling it all and seeing what my brain comes up with. I've got this wacky Chinese toy I need to stat up, so let's go with it. 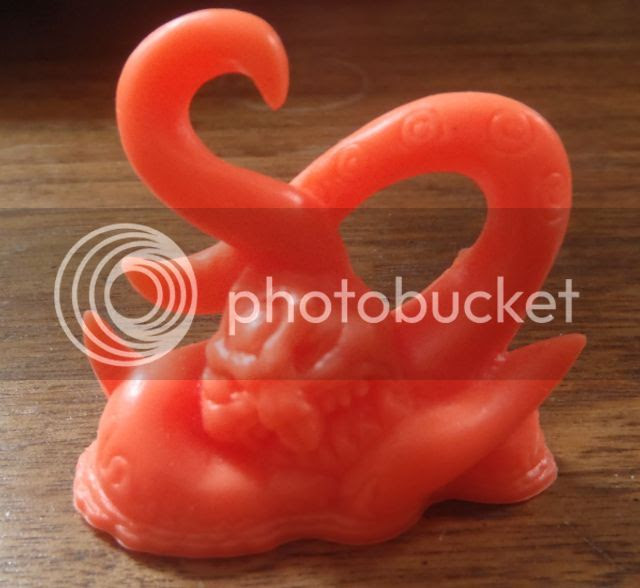 Okay, it eats souls. I'll just say it eats them straight-up in a mind flayer like way - given enough time, it'll just suck the soul right out of you. It doesn't need any special prep except a helpless or near-helpless victim. The "mini" has some weird buck teeth - those are now soul siphons it needs to physically stick into you with a lot of damage, because that makes them awesome.

Evolution - okay, what evolves the suck souls? Maybe it lives in a soul-filled environment. That screams "another plane of existence" to me . . . maybe it comes from heaven or (more likely) hell. Let's say hell. It comes from hell, where it devours the screaming souls of the damned who can't flee it fast enough. It evolved to fill this niche either out of some devil stock, or it's some weird thing that even devils dislike (hey, those are their souls) that exists on the fringes of hell, snapping up souls when it can. Like a Crown of Thorns Starfish, they're fine in small numbers but might explode in numbers and cause big problems. Maybe after a big war, they multiply and require the devils of hell to waste valuable corruption time hunting them down. That's pretty cool, I'll go with that.

Splitting - it reproduces by splitting. Okay, maybe when it eats enough souls, it'll split into two soul-eaters. I like that - you better beat this fast, and sending hordes of soldiers at it is a terrible idea. You need to go at this thing mano a mano, and kill it dead before it doubles up.

Now I've got its food source, origin, and reproduction. That gives me a better feel for this thing than "it lives in dungeons and has treasure." Well, it probably wanders around dungeons, sucking souls and annoying other monsters. It probably doesn't collect treasure, but I bet there is a lot of unguarded crap after it goes by . . . and it might find itself stymied by traps, tricks, or golems, which it can't soul-suck.

Example Two
But what if I didn't like those results? Screw it, I'm not a slave to the dice, they're a tool for me. I'll re-roll. Here's another. 2, 4, 5. That's "Exotic food," "Mutation" and "Host Carriers." Well, now it's a very different creature.

Exotic food - let's say it eats magic. Specifically, it eats magical organs and the brains and nervous systems of magic-users. Got Magery? Get eaten.

Mutation - well, this was once a simple mouth-and-tentacles creature. Maybe an octopus or an otyugh who ate magical sludge. Yeah, otyugh. It's horridly mutated from its source creature, but it'll share a lot of traits with the otyugh. Telepathy is a good one - now this thing can negotiate and implant suggestions. "Come here, there is a wand of power in this trash compactor."

Host carriers - so it reproduces by laying eggs in victims. What kind? Well, it's got to be something with a mana organ, magical powers, or the hapless party wizard. It'll forgo its own meal during spawning season, and implant its eggs via the tip of one its sucker-tentacles in its victim. Then it'll try to keep its victim imprisoned, perhaps by breaking its hips or spine (it doesn't need a mobile wizard, just a living one) or mentally confused until the eggs hatch, say, 1d days later. Then it's chow down on the wizard by the young.

Would this one keep treasure? Sure, either as bait or from avarice, or just as incidental stuff in the "used to belong to one of my food-mages" pile. It would also gather some valuable magical monster bits - the horn of a unicorn devoured for its teleporting power, the nails of a night hag, whatever.

Either way, I've got a nasty critter and I have a better idea what and where this monster fits.


And that's a wrap for my big three topics of monster ecology. Like I said in part 2, the critical bit is, these need to spark some adventure hooks. It's no use figuring this stuff out unless it adds to your game. And if you're playing a game where such issues break the fun instead of make the fun, skip these. It's just meant to spark your creativity and give your monsters more depth. More depth equals more ways to deal with the monsters.