I love painting and using miniatures. But recently I've had a few minis headaches.

- No Sealer. Is it that hard for anyone to keep Testor's Lusterless clearcoat in stock? Or know that it's out of stock when I contact them? Geez. I'm all out and no one seems to have it when I go. I might need to try the Army Painter seal, it doesn't seem much more expensive for the amount I'd get. I just don't know how lusterless it is. I want it dull as dull can be - seal, no shine.

- Broken Cases. The hinges on one of my storage cases of minis broke. I'm going to bug the manufacturer, because it's not even the case I carry around. It's the spare I keep in my office and keep my rarely-used minis in. It just up and broke in two places, and I have no idea why. Annoying, because it's a top-loader so broken hinge = unsafe to use.

- Minis I can't find. I have a lot of minis, but I can usually lay hands on any one of them in a minute or two. But not one of them. I bought a Pathfinder pre-painted medusa, re-touched her with paint, and got her ready for when my players would meet her. And I can't find her; she disappeared prior to them encountering her and she's still gone. It doesn't matter so much now, because the medusa got decapitated. It's not like I've got a horde of them elsewhere on level 2.

Bah. It's still really annoying that I was all ready and lost the prop.

- Minis I Don't Have Enough Of. I need 33 Druagr. Specifically, I need 33 well-armed Viking-like figures, scaled so they're taller than most PCs, for the inevitable druagr-clearing battle coming up. Guys like this: 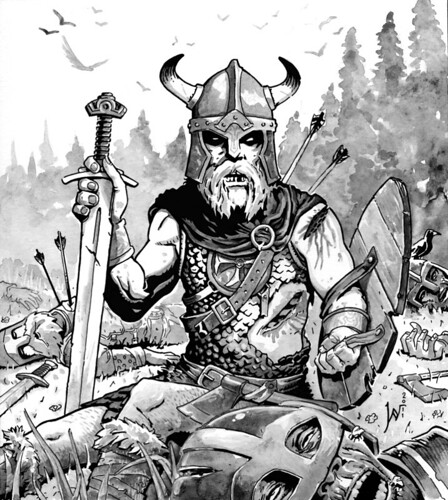 So I need to get off my butt and make 33 cardboard heroes, or 33 counters, or find 33 minis all alike. Probably one of the first two. But I'm being lazy, because making my own cardboard counters is something I'm not very good at.

I may just have to downsize that image above, print out 33 of them, and number them. But actual cardboard hero types would be better, and I could print them at the proper height. Any suggestions?

- Minis I Can't Seem To Finish. Some of my minis are easy to paint. Others, I can't seem to get them going. I put on a color on one part and blank on what goes on the rest. I can't "see" the completed mini. My paint jobs are always better if I can see the mini's final version in my head. Some come to me as I start painting. Others have been half-done or less for years, and I pull them out and re-start work and then stop. Can't finish.

- Minis I Don't Get to Use. Seriously guys, will you just go into the rooms where I placed the monsters I have well-painted minis for? I did a good job on them and I'd like to see them on the table fighting your characters. Is that too much to ask?
Posted by Peter D at 7:56 AM