The Highlander / The First Heroic Archer

One of my former gamers and still best friends just got back from a trip to Scotland. Naturally, being a MMA-doing former-blade-collecting author, he went right for the most important spot in Scotland:

Here he is, on his blog, posing with Kurgan's sword. 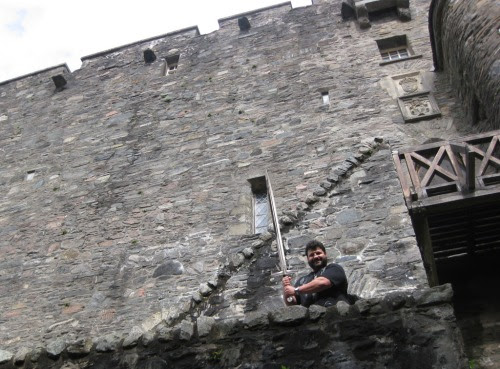 Technically he's posing without it, and his (professional designer) wife Photoshopped in the sword. But it's still ten kinds of awesome. And I'm not just saying that because he throttled me with a great pressure choke on Saturday morning at MMA class.

Tom has the distinction of playing what is very probably the first Heroic Archer in the history of GURPS. The advantage was written for, and introduced in, GURPS Martial Arts. Tom was in my gaming group when we tested the rules, and used a Great Wish granted by a magical giant Easter Island head to get the advantage for character, Renos. Renos was a lazy guy who turned bounty hunter with the aid of his gigantic Neapolitan mastiff Strego because that was less work than raising dogs with his dad. Renos was a fun character - eminently quotable ("The snake - nature's flail" or "A coward dies a thousand deaths - but they are all fake") and extremely good at what he did (Tracking-24 or 25 or something, pretty good Bow skill, too.)

The advantage wasn't really a perfect match for Renos. It helped him stay relevant in combat in a game full of flying magic-using weapon masters, hyper-skilled Trained By A Master fencers, high ST half-ogres, and fight after fight after fight to the death against the forces of evil. Renos was more temperamentally suited to being a bow sniper - Weapon Master (Bow) and a pile of Zen Archery probably was more his style. But that only became clear in play. But he was the very first one I know of, and gave the advantage a test in actual play that was invaluable for knowing that what we'd written worked as advertised (and where it didn't.)

Oh, and the Kurgan? I've got this suspiciously Kurgan-looking mini I need to paint . . .


* Rules sticklers will complain that, technically, you can't do that. They'd be wrong, because in my game a Great Wish was as much an excuse to blow saved points on supernatural powers as it was a direct grant of a specific amount of power.
Posted by Peter D at 3:34 PM