I've been meaning to take out some of the props from my last campaign to show them off. What prompted me to finally do it today was this post by Zenopus on the Great Stone Face and its possible connection to the Great Stone Head Enigma of Greyhawk.

Either just before or just after I started to run my last campaign (which ran from 1999 - 2010) I got a copy of Supplement I: Greyhawk.

In it I saw this cruddy but inspirational drawing:

I promptly put in a Great Stone Head in my campaign - a big enigmatic pseudo-Easter Island Head. I also promptly picked out one of a set of Armorcast stone heads to represent it. But my idea was twin heads - one a magical pole of power representing life, another representing death. So I needed two identical ones.

So once the players encountered the first head (thanks to a Teleport critical failure*) I called Armorcast and explained I needed a three pack of identical heads. No problem - they hooked me right up, at the same cost as the variety pack. IIRC it was $31 with shipping. Not bad for exactly what I needed for my game.

Anyway, I painted up a pair of them, and they became extremely important in my game. The Pole of Life, aka the Good Stone Head, is pictured here with the diorama I built for him. His hilltop location where the happy local natives made offerings to him and lived lives of pleasant and peaceful ease. 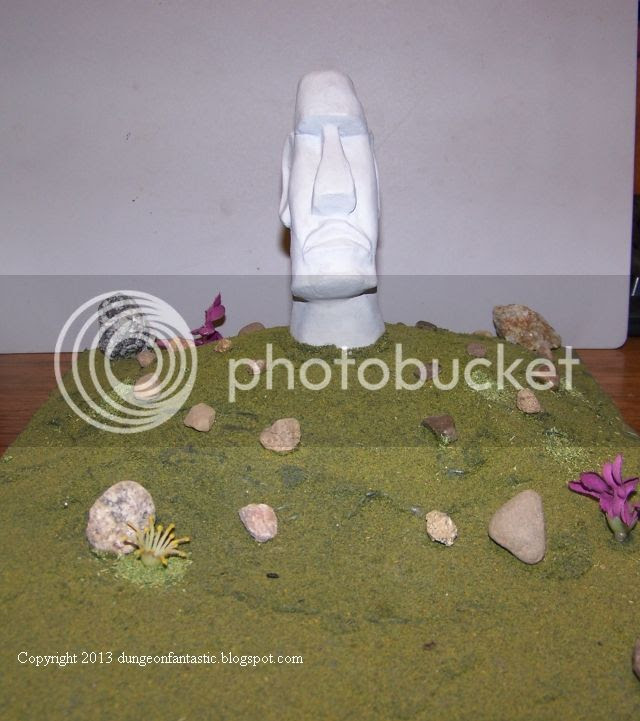 Eventually the players interacted with the head, got a Great Wish from it in return for service against the Big Bad Evil Guy (who they'd awakened and served previously - long story), and used the island as a base. Then they headed out to what they called Evil Stone Head Island.

Here is the Pole of Death, aka Evil Stone Head, who was originally based on a bunch of Mage Knight floor tiles in a treasure-filled dark room under a plateau on an island. And island full of killer tigers, blowgun-firing horde pygmies, tigers, a killer vampiress, and loaded from end to end with traps. Deadfalls, pits, whipsawing branches, nets, nooses, triplines - everything, all poisoned and lethal. The players made it through and met the Evil Stone Head, who also gave them a Great Wish in return for service against the BBEG. Oh and all the treasure the pygmies had collected for it, thinking it was an evil god (half right - it wasn't a god).

In either case, both were inspired by that picture in Greyhawk, and by my own crazy ideas and assorted half-remembered vague mentions of fun stuff from other people's games. 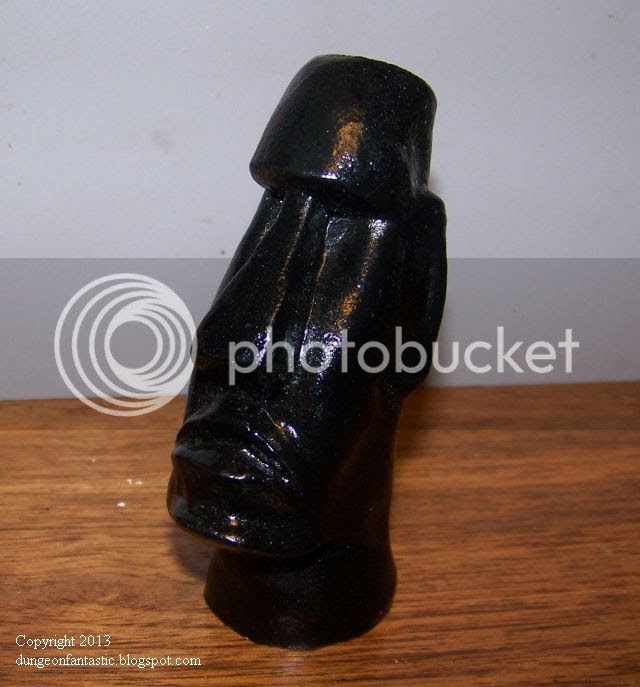 I still have these guys, and I had an unpainted third head as well I meant to sell but never did.

I may use them again - either in their original context, as a callback to my old game, or just as enigmatic stone heads of some other sort. But there they are, proudly an homage to Greyhawk.

* I stole a joke from Sean "Kromm" Punch and had every teleport critical failure by this one wizard put him on the island facing the stone head. So an 18 wasn't just scary, it was terrifying. What was this head? He'd immediately teleport away, which was funny when he later learned it was trying to summon him and it just was a very slow talker. By the time it got to "Hello!" the wizard was long, long gone.
Posted by Peter D at 1:44 PM