I've posted before about what is just about my favorite boxed set of minis:

Grenadier Miniature's 2004 Hirelings from their Advanced Dungeons & Dragons figure line. Such a favorite that I tracked them down on eBay, bought them, referenced them in a book, and, naturally, painted them.

I finished them two days ago, and it's finally a complete set.


Here they are, half done.


And here they are, complete! 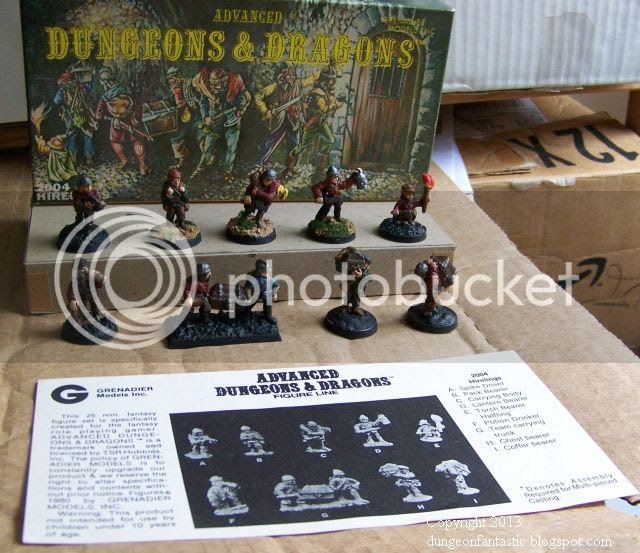 Most of them got the quickshade treatment, which worked well making these guys look weathered and grungy. The halfling torchbearer and the team really gave me a hard time.

My only regret on these guys is that I didn't hit on my "Guild of Hirelings" official red shirt color scheme until after I'd done a couple of them. Otherwise they'd all have red shirts. The only guys who don't are clearly employers, like the lead trunk bearer, who's armored like a real adventurer.


You've seen these guys before in my games. Shieldbearer Zed uses the potion drinking mini. The pack bearer has stood in for a created servant. And I'm pretty sure the lantern bearer has seen use as a generic hireling before as well.

I'd like to thank JCoo for this great explanation of painting fire. Without it, the torch on that halfling would still be keeping me down.
Posted by Peter D at 9:22 AM