The flooded prison is a sub-level of Felltower I'm especially happy with. 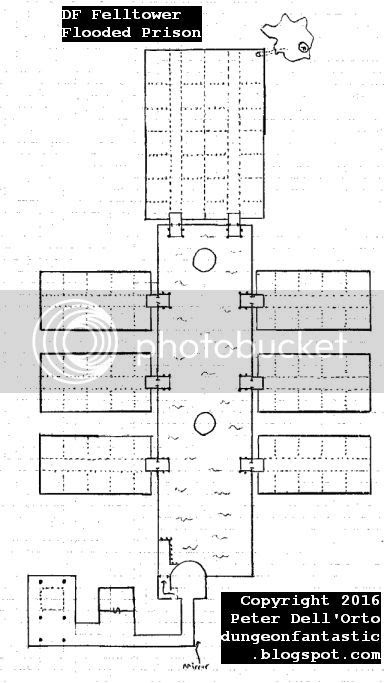 The history equally had very skilled and determined builders who meant to live underground, so this wasn't going to just be some cave area turned into a prison. (Although those are fun, as are "waiting areas" where you stay for untold time, like in the New Sun books.)

I also wanted a flooded area.

And an area with big pillars sticking out of the ground.

And and area with mixed flooded and dry places, like in U3 The Final Enemy.

So that prison level came about.

You enter it via a bit pit, so it's hard to climb out of - you'll need help from above and are subject to fairly easy massacre from above.

It's got a choke point to prevent prisoner escape.

It's got a mirror setup to keep you from sneaking up on the guards around the corner.

A fortified balcony to defend against prisoners.

A flooded area with deep water (30') and a mix of an armored subterranean shark (at least one), barracuda-like razor fish that can hop on land and eat people, and some plecka-like fish that don't seem to have any nefarious purpose.

And cages that are all below the water level of the area outside, and which are easily stopped up and flooded from the access area to them, just in case the prisoners really get out of hand. And as easily unstoppered to let the water flow back out.

And an escape tunnel, coupled with reasons why it wasn't being used. And, me being me, the escape tunnel was to go somewhere awful to explain why no one outside had heard of it.

And it needed to have the descendants of prisoners, ghosts of the slain or abandoned, and fishmen. Because I have fishmen stats and I like fishmen.

The cages you can walk on top of owe a great deal to the aspis-patrolled pits of A1 Slave Pits of the Undercity.

Much of the rest is a mish-mash of inspiration and things I liked about prisons and flooded areas in general.


When I stocked it, I rolled up monsters and treasure, and came up with a lot of "no treasure, tough monster" ones that became the ghosts (I'd planned on some, they made sense as monsters with no treasure.) After all, ghosts generally can't cross water in myths, so if that was true they fit there. And they don't go far from the place they haunt, and it makes sense they'd occur in places where people full of despair or hate died horribly or of neglect.

Then I rolled up a lot of monsters in the big area, but not so much treasure. And a small number of equally tough, maybe a bit tougher man-for-man, ones in the right central area, with a lot of treasure. Clearly, they were allied, or the small group had something that scared off the big group.

So I made the small rich group splitters from the crazy prisoners I wanted there, and made part of the loot a magic anti-mind power headband. And gave the crazy prisoner boss his mind attack power - something I'd wanted in from when I first conceived of them. It made sense and was a lot of fun.

And that's how the dice decided that I should have two warring groups of prisoners - a scary boss guy, and a rebel with something that made the boss less able to just step in and deal with them.

The rest of the placement was a mix of inspiration, ideas I wanted to use, odd traps and weirdness that made sense assuming people had come and gone, and so on. The teleporting book came up as a trick result, and I knew it made sense placed elsewhere . . . so I explained (to myself) how it had come to the prisoners. Nothing was really "rolled up" - only challenge, rough density, and riches. I decided how it went from there.

And I'm quite pleased with how it came out. Lots of opportunity for faction-vs-faction, roleplaying, straight-up combat, exploration, and more. Enough to justify multiple trips but also satisfy a one-and-done approach if the players preferred. They seem done with it now, but who knows, they may be back.

The only thing I didn't see coming, despite clearly placing the possibility for it, was the way they discovered it . . .
Posted by Peter D at 7:07 AM