Not to turn my blog into a list of other people's blog posts, but again today I'd like to highlight some blog posts I read that I really got a lot out of:

The Twilight:2000-themed minis blog It's 500 Miles to the German Border has a great post on weathering vehicle minis. Wear Value 5 comes from the game scale wear value of vehicles in T2K. Vehicles are valuable but hard to maintain, and since many if not most military units have broken up into small bands vehicles are worn-out, parts-starved, gear-covered combination wagon/fighting vehicles. This is just a nice bit of advice for taking any modern vehicle and making it loot used.

Joseph Mason has more issues with GURPS Dungeon Fantasy than I ever did, but has one of the same issues I've had - he can't put it down and walk away. I've said this before and I'll say it again - we played a playtest of Dungeon Fantasy Adventure 1 just because we'd been board gaming but hadn't roleplaying gamed in a while, and then turned that into a DF game. That DF game was meant to be "mess around until we get bored" . . . and that hasn't happened yet six years on. In fact, that biggest and most consistent complaint about my DF game isn't my GMing, the wildly unbalanced encounters I use, issues with XP systems or treasure, TPKs, etc. but that we don't play often enough.

Greyhawkery has a very evocative post listing the swamps of Greyhawk. The post "Poll Result: Most Dangerous Swamp really highlights what makes each one interesting and dangerous. I love swamps, marshes, and river deltas as adventuring places, and all of these put me in mind to encourage my players to explore the Cold Fens a bit more . . .

This is pretty much what happens in my game when people decide the best rear guards are the Per 10 hirelings they hired for 1/3 of a pittance each (success only): 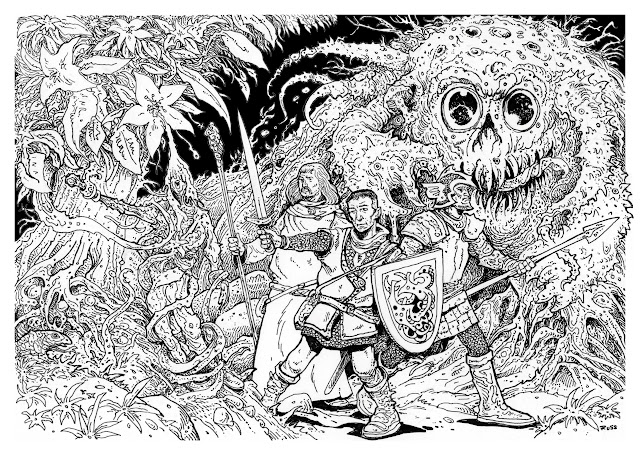 And finally, the roper in this picture always makes me think it's a guy in a costume. It just looks like a guy in a costume to me, maybe for Halloween or maybe in a surprisingly well-made low-budget movie.
Posted by Peter D at 10:43 AM