This post is mostly for my players. Way back in my last campaign, they ended up in the demon world facing off with bunch of demon lords, a lich, and a pile of "lesser" demons. One of them was an as-yet-unpainted, black-primed Great Chaos Demon of Nurgle from Warhammer 40K I'd bought off of eBay.

He's sat in my "to paint" pile for years since then. About six or eight months back I roughly painted him with some green, but that's as far as I got. Last Friday I stopped painting a mini I'd been working on, spied this guy sitting there, and pulled him out intended to do a little brushwork on him while the other guy dried.

Instead I painted him straight through to completion.

Here he is, done (except for re-highlighting the eyes). He's gloss coated with two layers of Army Painter Quickshade, both Soft Tone. I also Dark Tone shaded his spine and the mouth-thing and sword handle. I was going to matte seal him, but honestly, it looks awesome glossy, and he should be slimy and nasty. So I'm going to perhaps gloss coat him in the future to protect the coat but otherwise he's done.

I hate to spoil the surprise with minis with my players, but most of them fought this guy already.

Pictures beyond the cut. 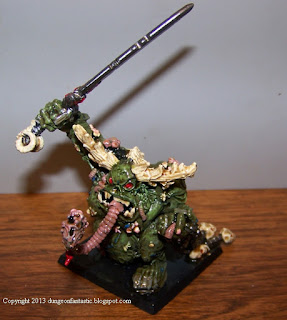 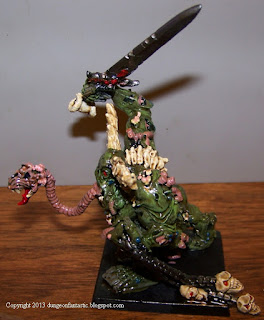 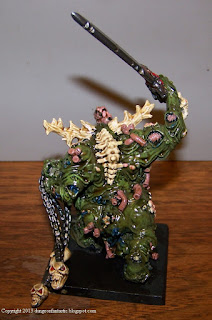