Greg Stafford has a Kickstarter up for a revision of the Prince Valiant Storytelling Game: 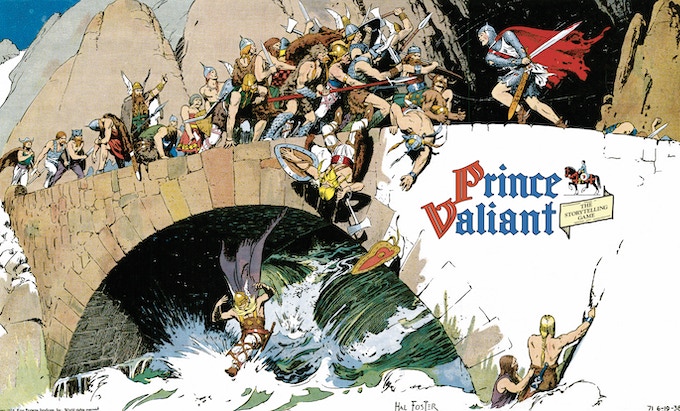 I'm not in on this - I have the 1989 Prince Valiant Storytelling Game. It's exactly as it says it is. It's about Prince Valiant, and telling stories. It rates character abilities in coins, and you flip coins. Heads is a success, tails is a failure, and you can get your coins whittled down from injury, exhaustion, etc. For a simple, straightforward, Arthurian game, it works well. It would make a good generic system for other rules-lite play. Really light - not like old D&D light, rather even lighter. That battle depicted above is one of the examples of play - and it's just a matter of a few opposed coin flips for Prince Valiant to knock off those foes one by one.

Worth a look if you like Prince Valiant, and if you want to see a really rules-light but well-developed game.
Posted by Peter D at 11:50 AM

Email ThisBlogThis!Share to TwitterShare to FacebookShare to Pinterest
Labels: misc