GURPS Martial Arts features a writeup of one of my favorite sports and favorite martial arts - Sumo.

The stereotypical sumo wrestler is fat. The caricature of sumo wrestlers is that are just big fat guys in "diapers" (actually, a combination belt/legless shorts article of clothing inherent to the sport) that slam into each other - fatter guy wins.

GURPS Martial Arts has this to say:

"Great bulk isn’t a requirement – young children, male and female, engage in the sport – but because Sumo has no weight classes, sheer size tends to influence a fighter’s career. Simply put, a large man is harder to lift and shove. Strong sumotori have won bouts “simply” by lifting a smaller opponent and dropping him outside the ring!"

It also puts Fat and Very Fat and Overweight as optional advantages.

Part of the reason is rikishi - sumo wrestlers - like Chiyonofuji, who passed away from pancreatic cancer a few days ago. I actually knew I knew his face when I saw the news, but until I heard his wrestling name I didn't realize who it was - you give up your sumo wrestling name and take a new one when you retire.

Chiyonofuji, aka "The Wolf," was quite lean for a rikishi. He was also obscenely strong, as demonstrated in his matches. He set records still unbroken 25 years on, and was one of the winning-est fighters of all time. 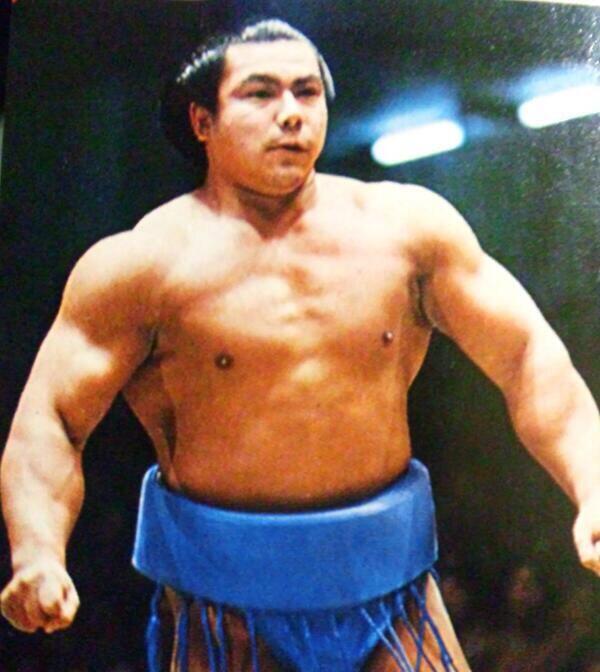 He's not the only one that's small - the wrestler formerly known as Ama and now known as Haramafuji is actually quite small for sumo. Still a bit overweight by "normal" standards but not by, say, pro football lineman standards. And Haramafuji is simultaneously one of three current Yokozuna (grand champion, the highest rank in sumo), has several perfect (15-0) tournament victories, and is the smallest guy in the top division.

Haramafuji (on the left, on the verge of victory): 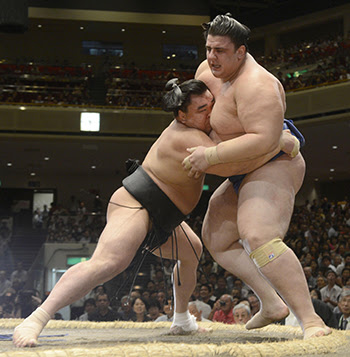 It was knowledge of guys like that that drove me making sure GURPS Martial Arts didn't require you to be fat to be a sumo wrestler. The weight helps - a lot! - but guys like The Wolf and Haramafuji show you it's a contributing factor to success, not a requirement for it.

Hearing of the passing away of Chiyonofuji a short time after Haramafuji won another tournament brought this back to mind.
Posted by Peter D at 10:14 PM