I've written a lot for Steve Jackson Games. It started with Pyramid magazine articles (in the 2.0 version), followed with GURPS Martial Arts, and kept on with a small assortment of other books.

The Pyramid stuff was written and then submitted - no one asked for it, per se, I just wrote it and sent in it with some hopes.

GURPS Martial Arts and the other books, though, were contracted. Either SJG asked me, or a fellow author asked for me, or I proposed the work. Then outlining, contract, and getting to writing.

My first contracted work for Steve Jackson Games wasn't writing, though, it was editing.


As I recall, I received an email from someone at SJG - maybe Loren Wiseman.* It said something like, Ken Hite said you knew the GURPS rules really well and could you provide some additional rules editing on this book?

That book turned out to be GURPS Traveller: Alien Races 4. 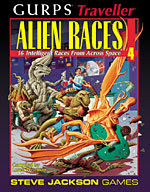 The job paid pretty well, more than I was getting for articles.

The work consisted of taking templates, checking them for rules consistency, checking them for format consistency (I didn't always do that well), and otherwise putting them into game shape. I worked directly with Steve Jackson, Loren Wiseman, and Sean Punch on these. I think with Andrew Hackard as well. Definitely with the first three.

It was pretty tough work. I had to go through the rules, go through the text, run things past Sean and Loren and (especially) Steve. We had email issues. Format issues. The inevitable problems of my inexperience doing this specific job, even though I had the specific skill set needed.

I don't think I did the best job possible. I think I did a more than acceptable job. I got it done. But I still cringe at some of the issues I had, which I just didn't realize to expect. Overall, though, it was a really good experience. I sharpened my editing skills. I went from "kind of a familiar" with SJG formatting to "very familiar" and that helped later with GURPS Traveller: Humaniti and with GURPS Martial Arts. My rules knowledge went from good to much, much better.

It was a good experience.

I didn't really look back on this book that often. I haven't cracked its spine in years. But it's still gratifying to see the title page and the triple thank you's from Steve. And yeah, it was my first contracted, requested work for hire from SJG.

* I can't check, because I swapped email addresses 10-12 years back and I don't keep the old message archive on my current machine.
Posted by Peter D at 12:59 PM