One of my favorite supplements is the one that came in my Rolemaster blue box set. It sits on my "places to convert to GURPS and play in" pile, but I never seem to get to it. It's sheer goodness keeps me from abandoning the idea of the project, though, and I'm going to try to explain why here. And why you should track it down.

This isn't a very deep review - for one that covers all the details, check this one on RPG.NET. Nicely, the author/designer/mapmaker/interior artist, Terry K. Amthor, comments on the review. 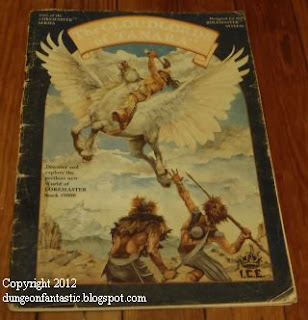 Cloudlords of Tanara is a sandbox setting for Rolemaster in their "Loremaster" setting. The setting basically puts the PCs in any of a few different bounded sandboxes. Tanara is one of those sandboxes.

The setting pits a number of factions against each other, including:

- the titular Cloudlords, who fly around on winged horses wielding throw-and-return axes and hurling bolts of fire. They've set themselves as messengers of gods to local simple folk . . .

- the Myri, who are simple and sturdy and are equally preyed upon by . . .

- the mysterious Duranaki, who use brainwashed Myri in their armed forces and who warily eye . . .

- the Yinka, a religious people who fear they're the target of conquest plans by the Cloudlords.

Throw in some basically neutral parties (the seafaring Sulini, harassed by both Yinka and Cloudlords) and parties hostile to everyone (the dog-men like garks, an evil cult, the cult's former leader now possessed by a magical sword of extreme power) and some meddlers (the Loremasters and the Navigators, who serve as information sources and a way to travel to and from Tanara, respectively) and an overarching evil (the Unlife), and you've got a hot mess waiting to happen.

Even the various factions have conflicts within them, generally, although not always. Nicely there isn't always a Good Guy and Bad Guy in each faction - so it's not a puzzle of allying with Good Underling vs. Evil Overlords in each case.

There is a lot for the PCs to do - pick a side in the conflicts, ignore the sides while they concentrate on looting, try to mediate, go their own way on a quest against the Implementor (possessed sword guy) by finding three magic swords to fight him, whatever. It's an interesting place to visit but could easily be the setting of a whole campaign.

It's a real sandbox in a way that no AD&D adventure of its day and age did, or that most published adventure locales ever really seem to be.

Because it is a complete sandbox.

Entire military rosters for each faction are provided, with stats. Want to know how many men the Cloudlords or Yinka can muster? Just look it up, along with complete stats for their leaders. Want to raid the headquarters of the Duranaki? All statted up, down to the trap effects, treasure, and magical items.

The various "dungeons" are equally well written up. Want to raid the Duranaki leader's house? Mapped and detailed. The Cult of Ezran? Same. Find the magical blades that can oppose the Implementor? Fully written up and ready. Locations are detailed sufficiently to run straight out of the box, although all could use a bit of expansion of details and loose treasure. But all of the magic items are written up completely, the traps are statted up, the guards located.

You do need to provide some detail - extra cultists stats, wandering monster stats, NPCs between the big names and the faceless ranks - but not a lot of it.

But not only that, there isn't a lot of extraneous detail. You can use everything in the book at some point, and it's really on-topic. The conflicts and alliances and issues and major players are all easily grasped and used. You don't have to sift junk to get there. It's tightly written.

The closest parallel to these I can think of are the 1st edition Twilight: 2000 modules such as The Free City of Krakow. You'd get everything - maps, major NPCs with pertinent information, details on military forces and morale and guns down to the individual gun or mortar. No "The Free City is well protected" but "Here is their TO&E with game stats." Cloudlords of Tanara is like that.

Oh, and did I mention the color-coded maps, so you can see where the guardrooms, vaults, traps, etc. are at a glance, without even referencing the minimally-detailed (but sufficiently detailed) map key?

I also love that while there are elven visitors to Tanara, that's about it for typical fantasy races. No dwarves, halflings, or elven tree cities (although the Duranaki are close there, but more sinister). Monsters? Demons, golems, undead, unique stuff? - sure. Dragons aren't mentioned, and probably aren't there. No orcs. Trolls, yes, but not the usual goblinoids. It's a place where your problems aren't orc invasions and grumpy dwarves and greedy dragons, but unpleasant humans in all stripes.

Rating:
Content: 5 out of 5. You could run a campaign with this right out of the box.
Presentation: 4 out of 5. This book is beautiful and easy to use, but you need a lot of page flipping, the print is often tiny, and the GM reference map shows you the locations of the important locations with tiny little numbers that almost need a magnifying glass to find. That could have been easier to use.

Overall: This is one of those supplements I'd love to set a campaign in. Either by making the PCs natives and let them roll, or stranding them there early and letting them navigate the difficult path of figuring out who is who and what to do about it. I did try to port a lot of it over to my earliest Rolemaster games, but they ended in a pair of unrelated bloodbaths and I didn't play on that world again (we did Greyhawk instead). I'm not running the kind of game now where this kind of setting could really shine, although I'm tempted to put a way to Tanara into my DF game. I'd like the see how my players handle the Cloudlords . . .
Posted by Peter D at 7:58 AM