I'm still reading my Dragonlance modules to see what's good and useful in them.

DL4 is another extremely railroady adventure - you can only do certain things, and if you don't, the NPCs will do them for you. But it does have some really cool stuff in it, making it worth tracking down a copy for salvagable bits.

There are a few things worth stealing here.

They take a clever dodge of using 16 different 30 x 30 square (300 x 300) geomorphs and arranging them into the sections of the city. The map is layed out like a checkboard, with each box saying which geomorph is there and which orientation it gets.

I say the dodge is clever because it reduces the mapping load, and it has a good explanation - dwarves are conservative, and like things done the same way over and over. Fair enough. That and the layout keys make for fast and easy mapping for the GM. I think it would also be interesting - the PCs will be able to acclimate to what the dwarven city looks like, and concentrate on the monsters and stuff and weirdness not odd-shaped rooms and layouts. Plus it helps make it feel big.

The sheer scale is impressive - the North Gate (where the PCs enter in the adventure) has three levels that consist of (by my count) 119 geomorphs. That's not small. While it is largely empty space in the adventure (for good reasons in the game world), it doesn't have to be.

But seriously, this is a ready-to-go megadungeon map. I'd make some photocopies of the maps so I can orient them and mesh them together. But it's Mines of Moria big here. Plus you can easily put your own additional geomorphs if you wanted some sections to be different. 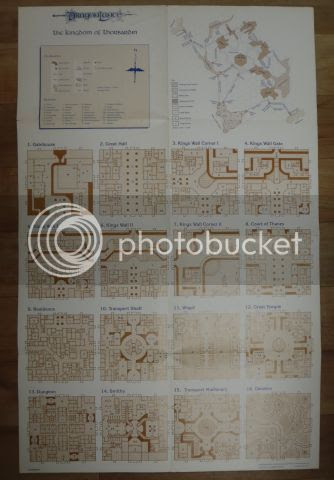 The Floating Tomb - Another 3-d dungeon. This one has a good idea (it's a special area with a special MacGuffin, so its guardians ripped it out of the earth and stuck it flying in the air). The map is easy to use and has a sensible layout.

I think they missed a good chance, though - a hovering dungeon you need to get to with a shattered gate (a problem in and of itself) is cool. Making it actively guarded is cool, too. But I always felt it would be better if it the tomb was ripped out of the ground but hovering in a huge cavern would be cooler. Still, easily done if you don't need to write in some climactic scripted encounter.

Monsters. In addition to the three draconian types introduced so far, there is one cool new monster: the fireshadow. This is an evil extraplanar undead creature made of cold, dark, green flame with a death ray and a flame attack that spreads evil flame exactly like green slime spreads.

The rest of the adventure, well, the sandboxy bits from DL3 have been tossed out the window for a bunch of scripted crud. But man, cheap megadungeon I bet your players haven't been to yet.

Administrative Note: I am skipping DL5. There is nothing remotely gameable in DL5 - it does have a nice map of Krynn, but better ones are easy to find. So, DL5 has nothing to salvage for a non-Dragonlance game, unless you really need the history of the Heroes of the Lance for another game. I will be back next week with DL6


The Rest of the Series: