The usual disclosure here: I write freelance for SJG, I play Dungeon Fantasy, and I've played GURPS since 1st edition (and before, if you count playing Man-to-Man). I'm also friends with Sean Punch. That out of the way, here is what you get when you get Dungeon Fantasy 16. 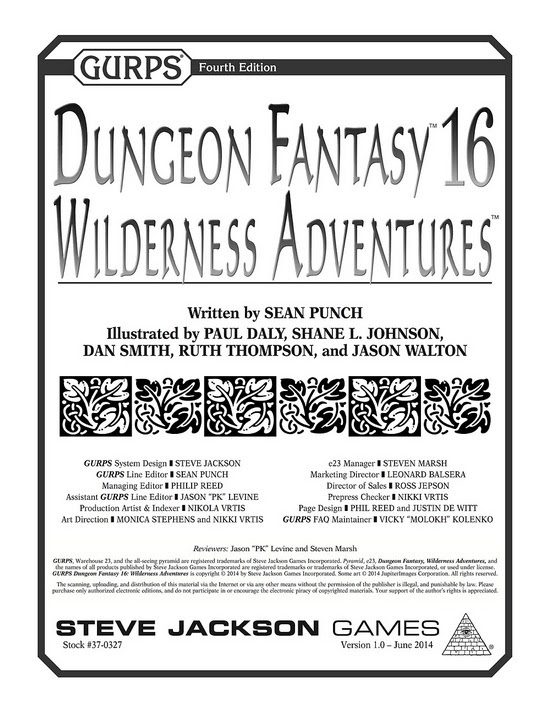 Wilderness Adventures is the latest in the Dungeon Fantasy line for GURPS. It's a series of drilled-down books giving simplified rules for hack-and-slash fantasy gaming. The kind where "kill it and take its stuff" is the point, and the deeper world is just there to explain why it's okay to kill those things and where you sell their stuff.

One big hole in the line to date has been details for wilderness adventures - slogging through swamps, exploring lost islands full of horde pygmies, and dealing with forests gone mad. This books fills that hole.

This book is useful enough that I busted it out and used rules from it right away in my megadungeon-based game. The group climbing roll and options to "go it alone" worked out nicely, and solved the ol' "enough people rolling means someone will probably fail" problem.

It's dense - there are a lot of rules in here. But like the rest of the DF line, it's all simplifications of more complex rules and/or special cases. The book goes out of its way to say when to skip detail and when to zoom in on it. It's good advice and it's pervasive - it's a good reminder that a game doesn't need to select its level of focus ahead of time, but can rather adjust freely on the fly to deal with changes in importance. Wilderness is just what is between you and the dungeon of the week? Use the simplified stuff in Dungeon Fantasy 2: Dungeons. Wilderness is the adventure? The deeper rules in Dungeon Fantasy 16: Wilderness Adventures.

The book also features a "Wilderness Trained" lens to tack onto a non-wilderness savvy template. It also has a lot of very specific advice for each template about how to be useful (and how to be munchkinny) in the wilderness.

It's easy to enough to use it as a rules catalog, select what you want to use, and then just use that. The rules are generally simpler than the specific rules in Basic Set. Fighting higher or lower foes is broken into three strata - vs. same level (unchanged), vs. a higher/lower foe (penalty/bonus), and vs. flying/ground (bigger penalty/bigger bonus.) Other examples include making potions with herbs, foraging, weather, affronts against nature, climate, and mounted combat - all are given easy, concrete rules you can pull out and use as the focus of the game and interest of the GM and players determines is necessary.

Rules I especially like include the camping rules. These are neat - roll vs. Survival, and on a success you can pick two of comfort, concealment, and line of sight. A critical success nets you all three, a failure one, and a critical failure none. It's up to the rolling player, so you can choose what you sacrifice and what you prioritize, and it's hard to ensure you get everything. It's that kind of combination of player choice and character-driven results that I like in my games.

Another one I like, and a good example of the book's utility, is the rules for time spent on daily travel. You get an hourly breakdown of how long you spend doing what, how to reduce it, how skill affects it, and how your tactics (scout, don't scout, everyone scouts as a unit, etc.) affect it. It's even got details on how far you can see based on flying scouts vs. popping up on treetops. It's good stuff.

Finally, the book has some great advice on sandbox games. This includes advice to basically just plunk down some towns, some terrain, and get some wandering monster rolls going and play. It's not like you need a lot to get a sandbox going. The advice comes right to the point, showing how to get the ball rolling and how to feature the wilderness skills of adventurers.

Overall, the book is extremely useful if you're running any kind of DF game that features wilderness adventures, or even wilderness areas in a dungeon. If you're not running GURPS, it still has good advice but it's very GURPS-centric advice. Recommended!
Posted by Peter D at 11:31 AM