S&W in the Southern Reaches: Session 6 - Castle of the Mad Archmage 3 - Norkers & Teleporters

We returned to the Castle of the Mad Archmage, this time with Bello the Dwarf, who was going to join us before but who was lost due to connection issues. We joked he'd stopped to tie his shoelaces and only now had finished and caught up.

We entered, passing two teens with sticks who were counting adventurers going in for taxing by the mayor. Mirado asked, "Are you coming?" They refused. More fools they than us.

The first thing we did was blunder into a pit, which Mirado fell into. He suffered little damage but only because he avoided the poisoned spikes at the bottom. He climbed out and we moved on, tapping with a spear in front of us.

We explored and found a "maze of twisty passages, all alike" and fought some skeletal dogs. We found little of interest except
a room with flaming freaking rolling barrels in it. No clue how it reloads, which led us to decide it was the honor system - you're supposed to reset the trap for the next folks. We didn't, though. and moved on to some doors we'd bypassed. From then on, it was doors over escape or passages, every time. We kicked down a few, crowbared open a locked one (and got surrounded with some weird mist that didn't seem to harm us), and in one, the group moved in as Mirado watched from the hallway. The group suddenly disappeared. They didn't answer Mirado's hail. So, he decided it was a teleporter and - since the group did the same for him - went in.

We found ourselves turned around, but the dwarf knew map north so we were good. We explored around the teleporter area, and found signs of a wizard - an inlaid silver conjuring circle, a not-well-hidden-enough spellbook (score!), and then a wizard and his mail-armored cronies.

We were surprised, and the swordsmen laid into Mirado and the wizard disappeared. His spellbooks had included invisibility, so it must have been that. We finally countered and Mirado cut one of the swordsmen, before Minister put them to sleep. The wizard had escaped out a side passage, and Mirado couldn't find him. We headed back to the room and searched until we heard a shouted curse.

Aha! Mirado and Rul charged back to the room with the hidden spellbook niche. We slammed into an invisible mage, and after some desperate (and mostly hapless) grappling, we got him down under Mirado. We set to with daggers until the mage died an ignominious death.

We went back and Mirado, run by a player in a bad mood, killed the swordsmen just to get 2 HP back.

Somewhere around this time, we found a room full of rats who had 2000 cp. Of course. We took it.

We explored more, and kicked down one door that was especially fun:

Inside were some norkers. 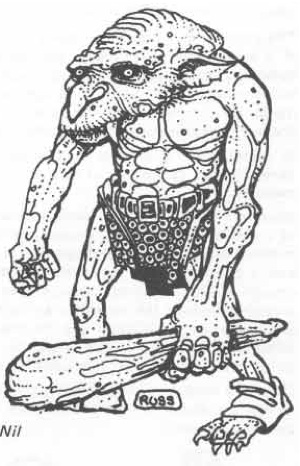 Mirado shouted with joy and we attacked. They died rapidly. The next room had more norkers, and they died too - so far, 10 down. 10 more charged us from another room, right into Minister. His sleep spell put 3 down, and they broke and ran. We briefly considered pursuit but then decided a) we can't map and b) they don't have pockets and therefore no real loot. We took their silver (poorly hidden) and left.

We explored more - despite not being 100% sure where we were, we prioritized doors over escape. We dealt with a few of them - including a number of those little dwarf doors. One had a trap of some kind going, but we never did figure it out. We fought more things, including camel spiders (big ones) and some really tough skeletons Minister couldn't turn but Rul could chop apart with his undead-slaying sword.

We took their golden gorgets and pried open the sarcophagus they guarded. Inside was a mummy with nice boots and a gold necklace.

Mirado grabbed the mummified corpse's boots and blew a Saving Throw (despite Luck, good Con, and a Ring of Protection). That got him turbo-rot (aka hyper-leprosy, aka mummy rot) and a pair of Boots of Elvenkind. In normal circumstances, I'd have given them up to, say, the guy who needs to sneak the most. But no way, it cost Mirado 1100 gp for Cure Disease so I figured he'd more than paid for the boots.

We simply headed back to town after that, easily connecting back up with our escape route and getting to the surface. The two teens were dead, throats slit, so Mirado marked two notches in the ground for them and we went to town. They should have come with us.

"Honor the arrow." One door had an arrow symbol on it with no explanation. One-way door, maybe? Erik ruled it was a normal door that opened out. So we went on through. By Gygax, we honor the arrow!

I was in a grumpy mood, which might explain the relentless murder. Guys Mirado would have spared died because I just wasn't having a good week. As the man said, so it goes.

I love norkers. Mirado even shouted, "I love norkers!" just before we killed the first bunch. Lucky for us, their morale cracked when faced with a plate-armored cleric/magic-user putting them to sleep. That combined with my terrible initiative rolls lead to 3 PC re-names right there.

We found a spellbook, some cash, and the Boots, a set of Bracers of AC6 (or +4, maybe) (sold!) and like 800 gp or so each counting the sales. But that's it. We've done very poorly for loot and especially for magic items so far. I came into the castle with a magic sword, a magic ring, and some money. I've got less money than when I started and a pair of elven boots. Oh well, it just feels a little poorer than smaller adventures tend to be. Interesting.

I was rolling very poorly, very often. It was rare for me to hit, infrequent to cleave, and frequently I did miniscule damage. I'm not sure why. I'd roll 6s on doors and 1s on initiative. Annoying. I even rolled only a 4 (on two tries!) for my HP, making my new HP 38, the only time I've gotten less than 8 hp per level. I was at 34 at 4th level with a +1 CON bonus, which is 36 HP max. I'm still doing okay, though.

Teleporter - this was fine, but like a lot of the traps. etc. and other encounters, it feels very . . . random. I don't feel like, "I should have seen it coming" so much as "Oh, yeah, some rooms teleport you and some hallways have deathtraps." I really understand what Courtney means about telegraphing traps so I can make some kind of informed decision. I'd rather say, "Ok, I brought that on myself" than "sometimes you search a room and there is treasure, sometimes you search a room and you teleport away."

D&D based games have too many subsystems. Roll high for this, low for that, but high for this, and percentage for that. It's annoying. I have some suggestions I'll codify into a post this coming week.
Posted by Peter D at 4:41 PM