I snapped two pictures of the big brawl yesterday. 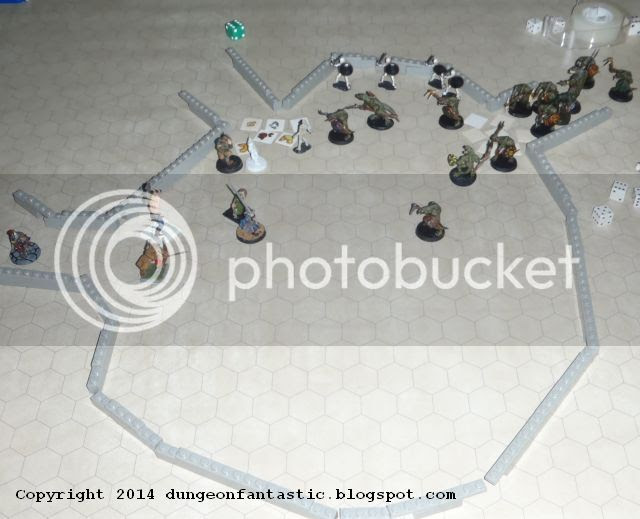 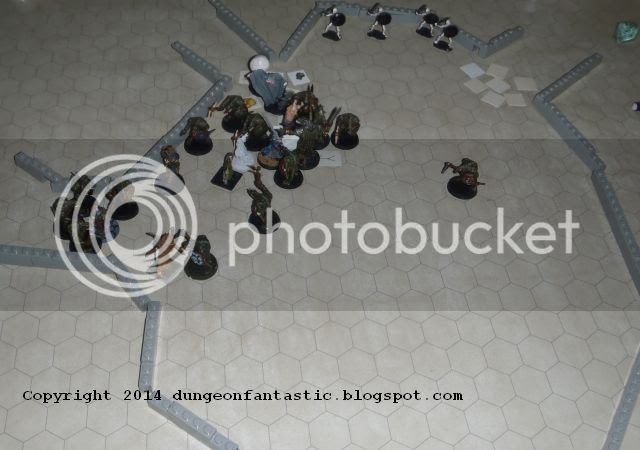 I have to feel for my players a little on this one. It was a fight against a mixed set of foes backed by special powers, with melee opponents who made melee chancy thanks to a potentially incapacitating aura, on bad footing (so all attack rolls were at -2, defenses at -1, and movement cost doubled) vs. sure-footed foes, with a low ceiling (so Dryst couldn't float out of harm's way). And they did a lot right:

- They had a rear guard, and refused suggestions to call him forward. Good thing.

- They kept their scout off on the rear-flank with a clear line of fire and channels to support their front-line fighters.

- The usual good tactics by Vryce to ensure he was the one determining fight distance.

- When attacked from behind, they moved to keep the onslaught from cutting them in half.

But some wrong, too.

- The rear guard was only Gort - not even a tripwire Created Servant to alert them through its death. Gort is a wise old NPC, but his skills are badly off their peak.

- A ragged line thanks to hurrying forward to try to snag treasure instead of securing the room and then snagging treasure. Although Overconfidence and then Greed may have played into that - it's why you get points for disads.

- Not quite enough coordination early on meant Bern was in the front line when their fast foes charged them, and he's poorly equipped for that even against less-worthy foes.

- It's deeper in the dungeon than they've been before - at least 50', probably more like 60-65', below the 3rd level. It's a place that demands more caution than they showed. They were more worried by traps or the treasure being a fake than by being hit from three directions by a prepared foe.

I don't mean this as second-guessing them. Just noting what I think helped, and what I think you won't see quite so much of in the future.

Overall, even if they'd been setup perfectly it would have been a tough fight. If it wasn't for the fortuitous possession of a specific magic item, it may have been a TPK. It was a set-piece meant to be a bit of a challenge. Sometimes those don't work out, sometimes they do - I generally just set it up and see how it goes. This one was a little tougher than I'd expected, and I'm glad, because that cloak fiend mini came out so well: 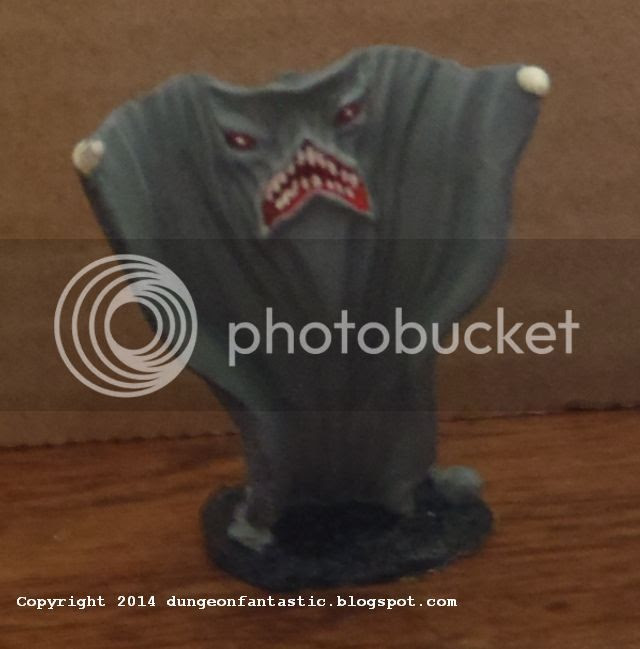 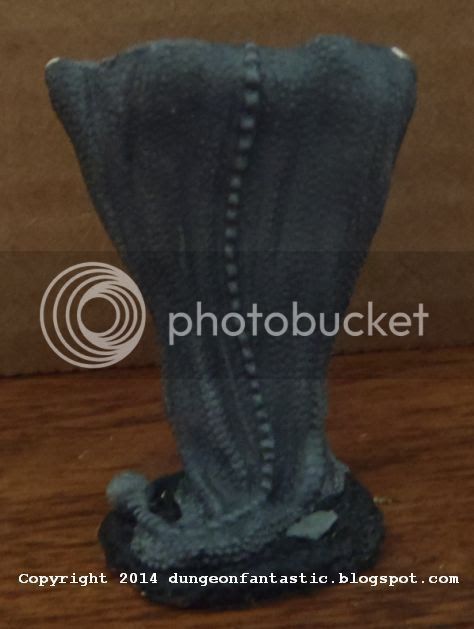 Lucky for them, the enemy was content with beating them - had their foes been aiming to kill before winning, they might have lost a few PCs and NPCs there. Raggi was wide open for death when paralyzed; so were Galen and later an unconscious Gort and Mark. But the "trogs" were trying to concentrate on fighters and trying to win the fight. So the victory came with relative lack of lasting damage. But it was within a whisker of total defeat, and that wouldn't have ended well. The calcified "sculptures" spoke to that pretty clearly.

And yes, Mark Strawngmussel's name was inspired by The Many Names of David Ryder from MST3K Ep. 820, Space Mutiny.


The smooth talking to get by the wyrm without a fight was good, too. It initiated talking, but the on the way back, it may very well have tried to eat them . . . and they weren't exactly loaded for it. It would have been a harder fight than on the way in.

Shield: Boy, the Shield spell plus a magical large shield is a ridiculously effective combo. Dryst was retching and nauseous and dulled by the cloaker's hum and still had a defense well above 50%. I'm not sure how I'd address that, though, but I can easily see someone with a Deflect 2 or 3 large shield (DB 6) and a Magery 6 Shield spell (DB 6) having a Heavy Encumbrance no-Retreat Dodge of 14 or 15. It's a lot of power and money to do that, but would it be fun? Would anyone want to fight that guy as an enemy? "He defends with ease, every. Single. Time." A cap on bonus DB might make sense.

Resist Poison: I figured, immunity means the ongoing effects stop, and ruled it that way.

Iron Arm: Bad wording implies a failed Iron Arm has the caster "parrying with his arm." Sounds like "I get an unarmed parry," doesn't it? I don't think so, I think it's just poor word choice, since other Blocking spells don't give you a backup roll. "I Iron Arm, and if it fails, I defend normally, and if I chose AOD Double I get yet another defense!" - That's lame. So no, it's Iron Arm, and if it fails, your opponent either hits your arm or the original target, his choice.

Universal Scrolls: I'm not sure I'm using these. I'm absolutely not using Universal cleric scrolls. I'm not using tattooed/etched scrolls on gear at the moment, either. Sorry.

One note for myself: I need to write down the visible armor of the PCs, because sometimes I've had enemies attack a PC and then the PC says "Oh, that's where I have my heaviest armor, unlike my leather-clad legs" or whatever. Appearance of weak armor should be a trigger for aiming there.

Wizard Eye: The addition of Wizard Eye will really affect exploration, I think. Invisible Wizard Eye isn't available in my game, so it's not a secret scout. But it's still going to change things.

Another note: We're using TG, so I need to get everyone's 1 handed and 2 handed grapple and Trained ST on their sheets, so I don't need to figure it out for them when I misplace my "handy" TG reference card with those details on it. I may need to make a "one handed grapple" and "two handed grapple" weapon listing and tell GCA how to implement it. Since I'm using a modified form of TG, I can't just go get other people's work.

Describing caves is tough, too. Maybe I need to just make a player-facing copy and figure out a way to deploy it in chunks, or deploy it covered, or something. Worth thinking about, as there are more cave-like areas in the dungeon.
Posted by Peter D at 5:09 PM