Derps, or why you should lead with the monster's name

I learned an important lesson a while back about dealing with my players.

Lead with the monster's name.

Or at least, throw it in there, especially if it's a homemade monster.

Because these are "derps": Actually, they're vilstrak minis from the 1980s TSR lead minis line. Why they chose vilstrak to do, I don't know, maybe because they are easier to sculpt or something. But I took them, painted them up, dubbed them Rock Trolls, and put them in. They're not dissimilar from vilstrak, but they aren't really a conversion so much as share a common theme thanks to a re-purposed miniature.

Either way, when I introduced them, the players immediately saw their crystalline but kind of goofy grill and dubbed them "derps." I failed to lead with the name, and you can see what happened.

Maybe if I'd said, "You see these things clomp out of the darkness - Galen realizes they must be Rock Trolls!" or something like that, "rock trolls" would have stuck.

I probably should have painted some dripping blood on their teeth, too, just to imply these things could bite your face off if you goof on them! Because the teeth do look kind of goofy (and that one on the left needs a dark grey touch-up.) I was trying for "cold and alien" but I don't think it happened. 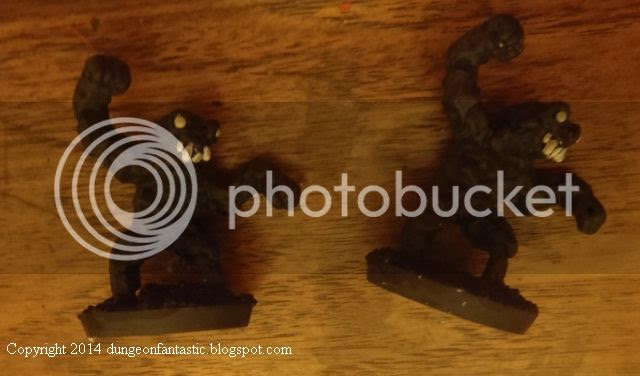 In any case, I'm starting to realize there is no value to concealing the name of an unknown monster. If I tell you what you've run into is a phase spider, and you've played AD&D or a certain gold box game, you'll know you're in trouble. Knowing the name is power. But if I say, "You've run into a Rock Troll" and plunk down a mini you've never seen in your life, knowing the name just gives us a common basis of discussion. And saves me, the GM, of the pain of my players naming your monsters for you. Trust me, players don't hand out cool names to bad guys.
Posted by Peter D at 9:53 AM