I have an "Introduction to Players" for a megadungeon game cut-and-saved on my computer.

I've read it a few times, but I don't think I ever posted about it.

First, here it is - although it is worth reading the entire thread, this post is extraordinarily valuable on its own.

The Dungeon--by which this author means the generic category and not any specific instance, though the principles apply in both cases--is a weird, unfathomable, and deadly place, and as such it should sound an irresistible call to those with the doughty hearts of adventurers. Importantly, it is also vast--do not fall into the trap of trying to "defeat" a level. Set goals, work to achieve them, and don't be afraid to move on when the opportunity presents itself. You can gauge what sorts of risks you want to take, and what sorts of rewards you wish to win, by considering the party level versus the dungeon level, as a rough equivalent exists in terms of PC abilities, appropriate challenges, and rightful prizes. Cautious parties may stay on safer levels, but the treasure will be less; daring parties may make forays deeper into the place for richer reward, but the danger will also increase. Choose the path that suits your party best.

Within you will find ferocious monsters, lethal traps, cunning tricks and buried secrets, tortuous layouts and forgotten ways, baffling riddles, and best of all, fabulous treasure beyond imagining. You the player will be challenged as much, if not more, than your PC, and it will take the combined skills of both to succeed. This place is not merely a workaday, subterranean lair, with logically arranged sleeping and eating areas for a species simply somewhat different from (or even antagonistic toward) humans and demi-humans. The door you open is a portal, the stairs you descend a path, into the mythic underworld, luring you farther from the rational and sane daylight lands above, where a man may plot his way with confidence in the laws of nature, and into a nightmarish world of magic, evil, and elements that can devour your PC's very soul. You must be constantly on guard for peril from any quarter; you must manage your resources carefully, retreating when it is wise yet advancing when the time is right; you must demonstrate bravery, intelligence, and prowess as well, if your efforts are to be repaid with wealth and power. Not everything within the crumbling walls, forsaken chambers, and winding ways is hostile, and you may find allies in strange places or negotiate safe passage from others--but be wary of treachery and ill will. Those who think and fight their way back out may bear the riches that will spread their names throughout the realms of Man; those who do not will die a lonely death far from the places they know and cherish."

It's a very inspirational read. It's also a good summary of "old school" megadungeon delving, without falling on either side of the "PCs as playing pieces"/challenge the players' skills vs. "PCs as characters"/challenge the characters split. It's equally applicable to either style - mine, FWIW, is more the latter than the former, but still involves both. No matter how your game system works, if you're delving into gigantic mazes of underground peril, it's good and useful stuff to put in front of the players.

Evocative. It makes you feel like a megadungeon is a pit of despair full of grave challenges and unimaginable treasures. It's a prose Erol Otus picture. 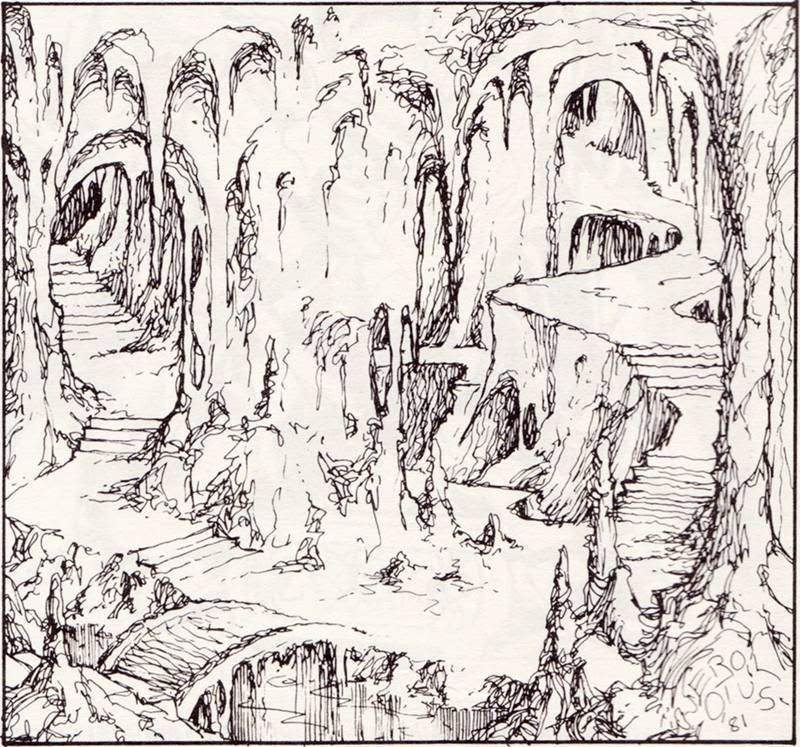 Practical. For all its evocative language, it's practical. It's got sold advice for a party looking to delve into a dungeon in less words than the Players Handbook spends on the same subject.

Challenging. Read that, and you feel the offered challenge of a megadungeon. You don't think, what a waste of time. It's all, "Can you succeed where others have failed? Do you have what it takes?"


Doesn't that make you want to dare Felltower, when the PCs come back? They haven't been to even half of the levels I've detailed, or even a quarter of the sublevels in that place. But they will, because of all the things Evreaux said so well.

Plus, hey, he's got the Captain of Space Battleship Yamato (宇宙戦艦ヤマトto my fellow Japanese speakers) as his icon. That's a bonus.

Slightly related - here are two things I put in front of my players about the megadungeon they've explored in my game:
Felltower's History
DF Game: First taste of the megadungeon
Posted by Peter D at 8:41 AM