I have some games I've picked up over the years, refuse to part with, but I'm pretty sure I will never play.

One of them is Omega Game's War to the Death. 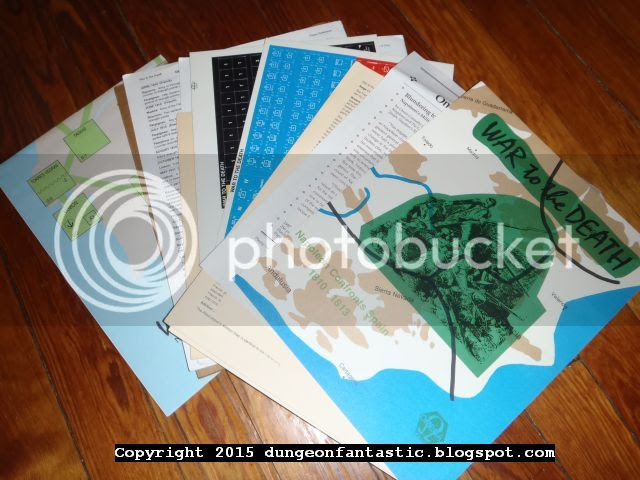 Years back, probably when I was replacing my badly worn copies of the TWW series, I chanced on a sale by Omega Games. I promptly bought several games including WTTD.

Why I Bought It

It was a bargain!

It was, actually. I remember the games being very inexpensive, although I can't tell you now how much each was. Plus the topic is pretty unique and interesting. There aren't exactly a glut of games on the market that cover that war.

So, interesting topic + inexpensive. Seemed like a good deal. Even if I played it once, I figured, it would be worth it.

The grind of a conquest-and-hold game against a weak-ish army and a guerilla resistance is a pretty interesting one. The topic of the French invasion of Spain is interesting as well. You have a fantastically effective field army vs. a country that just refused to be fully conquered, in an invasion resulting from accident of history instead of pure miscalculation. At least, how I read it. Seems pretty interesting.

Why I Probably Won't Play

My wargaming time is severely limited, so I can't see busting this out and spending my limited time on it.

I've also read reviews that say it's pretty much inevitable that one side - the Spanish - will win. So "winning" for the other side is just prolonging the game. That might be an interesting challenge for a pair of experienced gamers - who can keep the defeat off the longer? But that supposes multiple play-throughs and deep competitiveness.

Another Omega Games wargame I have is Victory in Europe, which is absolutely a "hold on against the inevitable" game. But I think it's got a different feel when you are Germany trying to stave off annihilation as long as possible vs. the Allies than playing, say, the the French knowing your best decisions are all going to come to waste. At least in Victory in Europe, the goal is holding on, without any illusion that you are supposed to somehow win. It's also vastly more likely that I'd be able to talk someone into playing a WWII game than Spain vs. France.

Why I Hold On To It

It's an interesting read through, for sure.

It helps that it takes up a tiny bit of shelf space.

I do hold out some hope I will eventually play it, or at least utilize elements of it. It's a game I periodically look at, and decide I'd like to keep in my collection. Even as I know I'll never use it, I feel like it adds more than it takes away by sitting on my shelf.

I'll do more of these, with RPGs as well. Some I hold onto for nostalgia, some to re-read, some just because they aren't a burden to hold on to.
Posted by Peter D at 1:04 PM