Picking up where we left off many months but a mere few game minutes before . . .

(We run a half-split, have-merged session today. I'll be light on details for the half that didn't involve my guy. I wasn't paying any attention.)

Post-combat, we suffered from some extreme exhaustion (4d FP - which even with 16 FP knocked most of us down and into "Do Nothing" for a while). We managed to get into the Warbot, Adjunct Captain Hopper. I re-christened her "Softie" for mostly bad reasons, and thankfully it stuck because my backup name was suggestion was worse.

Long story short on Softie was that all of her fuel reserves were dry, the generator was too weak to power her up . . . but she could coast at 10m at roughly 10 mph using her emergency environmental power converter. We couldn't get her up to elevated highway, so we flew her straight home.

This being Gamma World, bad things happen. As we cruised (we joked, at 9m so we had some climbing room if threatened) we flew over some stiff grass. Turned out it was a field of zeeth. Zeeth teleport spiky seed balls into their victims. One appeared in Short Bus's gun hand and basically blew it up. One appeared in my left leg next to the bone. More appeared, but we kept moving through and doing emergency surgery. Princess followed my somewhat expert instructions and carved out the one in my leg with a slice between the major muscles, and didn't kill me (a pink injector helped.) More appeared, including one between my toes (ouch, but not in me) before we got out. Sigh. Short Bus and I suffered heavy damage. We knew for next time to avoid the spiky grass - and honestly, I was too busy dithering about with our loot to pay attention to what we'd been heading into. Bad move.

We reached the Bal'Kree camp and left Softie at the edge - she didn't have power enough to climb above their barrier-like tree plantings. We headed into the camp.

There we discovered some new 20th Homeland soldiers - about 10, IIRC. They'd been dumped out of the vault like we had, and limped out heavy on food and water at the command of Newbie, their LT. (Actually, Newbie got directed around a lot by Fatbox) They made it out, found the airplane bridge (but no brass, since Caveman made us police it up last time.) They found the buryin' holes, which were empty. They also eventually found a "tree" sitting in the road. Said tree turned out to be a "tentacled elephant!" according to Momma's Boy, who helped machine gun it to pieces with his Mark 48 MG.

In any case, they made it to camp. Newbie, sadly, convinced most of them that they were near Battle Creek, MI (true - the "Bal'Kree" got their name from there) and they were going to go home. The protestations of folks who realized that there wasn't no Michigan anymore fell on deaf ears, as did the multiple passes the more lecherous folks in the group (Love Handles and Momma's Boy) made at a female 20th Homeland soldier.

Once they left, we put our heads together and decided to execute our plan to refuel Softie. We had two real options - a possibly semi-online plant held by some possibly not unfriendly types, or an online plant held by some "Purists" - mutant-hating guys. I voted to wipe the Purists, but difficult terrain for Softie was between us and I couldn't convince anyone to fly around it over water. So instead, since Option A was right out, and B was the clear choice, we chose Option C and headed to the "Proving Grounds." It's some kind of irradiated deathlands were people go to prove their mettle - and they come back changed, come back proven, or come back not at all.

So yeah, we went there.

I don't know either, and I was there.

So we hiked up to the Proving Grounds. We passed some odd clefts in the road, which seemed to be from some large burrowing animal. We went over and around.

We reached the Proving Grounds without further incident. It was an old parklands, with a smallish hurricane shelter-ish bunker, a bleachers, a gazebo, and a ranger station.

It was also crawling with Sep - sand-diving sharks. 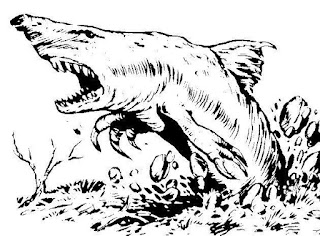 How it basically worked was:

- We set up on the bleachers.

- We tossed rations (and then junk) to draw out the sharks and shoot at them.

- Momma's Boy stripped down to armor and minimal guns and made a run for the bunker.

- We covered him, but he was still gnawed on by a shark and had to shoot it off of himself. Bopping it on the nose was less effective than SNL led us to believe.

- We sent out Fatbox and Love Handles, this time with NBC gear on. Shot Bus threw trash to draw the sharks. Princess and I shot the sharks (yes, Doug, at full ROF.) They made it. Few sharks did.

- Fatbox decided it was a fap hut, for lack of a better term, and that's what the proving grounds consisted of.

- They took the rest of the comics and the books and ran back. We shot more sharks, and saw a GIANT shark come up and eat some thrown trash.

We eventually took our stuff and headed home.

We made it back to the Bal'Kree, no closer to refueling our warbot. We did have a bunch of books to give to the Restorationist, Serven, and everyone noticed that my eyes had turned white. A sign of "the change" we hear.

When we got back, though . . . Barbie was mysteriously gone without a trace!

So, we have that to distract us from ever going on our mission.

We chose names for the person next to us. One of the choices I had was Conan, but Momma's Boy's player would have loved that. So, no way. Momma's Boy. This is the logic that meant that Star Wars fan Fatbox is Fatbox, not Wookie. And Love Handles - well, someone was going to get that one.

Fatbox's player is USMC (Retired), so he had an impressive ability to suggest to his LT all sorts of stuff. Mostly in the, "Sir, like you ordered, I made sure everyone got extra ammo" or "Sir, we're advancing in a standard patrol formation, isn't that right?" kind of ways.

I'm not sure how I got mutated. Everyone got a roll at the end except me, andi announced they were fine, and that I was mutated. So what did I do or not do that spelled automatic change? No idea. I wasn't the only one hit by the zeeth. I may have been the only one not running into radioactive fields this session (and only briefly did a session back.) So, yeah, no idea.

My character has Overconfidence as a Quirk. Basically how I play this is that I'm sure I'm going to kick butt at anything I try. There is a shark on you? Full auto at it, I'll hit it and miss you. There is a seed-thing in my leg? I'll have my buddy cut it out with a knife without anesthetic. We need a rear guard? I'll face backward, anything that comes up will be seen and killed. Not so much the "run into radiation for porn!" type of quirk-level Overconfidence. I'll let the Impulsive and Curious guys do that - which they did!
Posted by Peter D at 4:28 PM