Greyhawk vs. the Forgotten Realms - my play experience

This is me expanding on my comments over at Tenkar's Tavern on the subject of the Forgotten Realms vs. Greyhawk.

So, Forgotten Realms vs. Greyhawk? 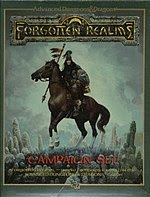 For me, looking back on my campaigns - how many, how long - the Forgotten Realms wins.

I had more games go longer in the FR than in Greyhawk, using the FR boxed set and some early supplements - and actually a couple later ones too, now that I know enough to recognize them as post-whatever-that-killing-the-gods-thing-was.

The Forgotten Realms boxed set had these hexless non-glossy maps with a smaller scale (1"=30 miles to Greyhawk's 1/3" hexes at 30 miles each), and came with a hex-based and ruled clear distance overlay. I could draw on the maps and put in roads, mark spots, etc. and only put down hexes and distances as they mattered - between two actual points. Greyhawk's maps are beautiful, but they are glossy (can't easily mark them up) and the scale was big enough that I needed to draw a new map to really play in a given area. Which was time consuming, so I didn't do it often. I think that contributed in a major way to my play in the FR. Smaller-scale maps you can draw on - that made continuous play in the same area easy.

The FR maps made the place feel very friendly, very changeable, and very accessible to me. The Greyhawk maps made the place feel very big, very expansive, and very cold to me. Beautiful, but without an easy handle. The games I played on it traveled a lot, or plunked right down into a single small place and didn't move much. I think that's because of the maps more than anything else.

Other things might have helped, too - Greyhawk felt like a broad, sweeping wargame map to me. Kings and states, with adventures along the seams between states. FR felt like a playground of adventures, with kings and states laying on top of a rich layer of dungeons and adventure locales. It felt less solid and easier to dig around in, and easier to change. It felt set for adventures rather than set for wars, somehow, to me.

Seriously. Just start where and when you want to start, and ignore the rest. It's not important, or relevant, to your games.

I won't lie - the thickness of the later canon could be a problem in the Forgotten Realms if you let it. But Greyhawk came with later canon too. I just killed off Elminister* (who needs another person's Mary Sue?) and let the players run around doing crazy crap. I think canon might make the FR more of a problem for more people - which canon do you use, do you keep up with it, are later supplements useful to you? But Greyhawk has the same - Greyhawk Wars (which I had, played, and then sold for a mint), the 2e/3e Greyhawk setting adventures, the Greyhawk books (by Gygax, Niles, and others), etc.

In the end you need to use your own canon, and I may have just gotten in early enough, hard enough, and with my own stubborn insistence on "my way" not "the books" pushing me through. I'd hear with amusement about Drzzt and Blackstaff and Elminster in the books, but they mattered to me as much as stories about Gord and Mordenkainen and Tenser did in Greyhawk - not at all. They were just other people's war stories, nothing more, and they were superseded by things that had already happened in my own gaming there. No new canon made what I did wrong, but not the other way around.

Look a large amount of supplements for a setting as a huge amount of stuff you can choose from and choose to take advantage of. It's not required. Make sure your players know that, and you can comfortably co-exist with canon.


Forget the canon and just play and let your own canon develop.

And seriously, kill the creator's NPCs. Greyhawk is better once Mordenkainen is dead and gone and Iuz a valid target. The Forgotten Realms are better once Eliminster is a doddering old helpless dude and the PCs, not the NPCs, are the final shield against chaos. Get rid of them. You'll be happier and ultimately so will the players. And you can still use the supplements, since you want locations, NPCs, monsters, and sandboxy places - not more of the canonically important NPCs.


* Technically, I just made him a cranky old sage, not a mighty wizard. The PCs who thought he seemed cool got to talk to him, but that's all they ever did. He wasn't a canon-protector.

If you crave details, here is what I remember running:

- A couple of short AD&D games way back in the day, mostly set vaguely in Greyhawk but not pinned to a location so much as floating from spot to spot. ("You are here, and the dungeon is over here, too.")

- A couple Rolemaster games for my cousin, solo.

- Two early GURPS games using 1st edition GURPS that were very short. One went a single fight and then one player quit (not sure why, but not game-related, and he came back shortly after before taking yet another break from gaming), and the other was going fine but then we suddenly switched to the Forgotten Realms.

In the Forgotten Realms:

- One or two abortive GURPS games set in Waterdeep, using FR1 Waterdeep and the North, which I may have gotten before the boxed set, or not. I can't recall now. These games only went a session or two, before they merged into . . .

- . . . my multi-year, overlapping group GURPS 1st edition/later 1st + Update/later 3e campaign. Something like a dozen players came and went in this one, around a core group. Players changed characters, or at least some did - others stuck around from start to finish with the same guys. The game ranged all over the world, from Waterdeep and the Dungeon of Death (my version, not the module) all the way south the Halruaa and east to Thay. That finally ended in a sputtering end as my gamers moved away or got pulled away.

- . . . my first big 3rd edition GURPS game, which started as a solo game for one of my players and his dwarf fighter with a pick. He then recruited his friends and they started to play. Some of my current group were in this one. This one lasted a bunch of years, and players came and went and games were started, ended, and then re-started all over the map again from Waterdeep to Halruaa (again) to Thay to the Sea of Stars to the far, far south (thank you, Travel Map of the Realms).

It was only after that game ended that I moved on to the Known Worlds of D&D (which I'd used in my AD&D days in High School, and in my Rolemaster days, also in High School) for a GURPS campaign.