This is another review of a piece of gaming material that I like a lot. It's for GURPS 3rd edition, which is no longer the current version of the game. SJG has been releasing their old back catalog on PDF.

Technically, I'm reviewing the softcover version of the book, which I received back in the day as a credited playtester. But it's available in PDF now, and it's been over 12 years since I read the material thoroughly, so I decided it was worth a close re-look at it. 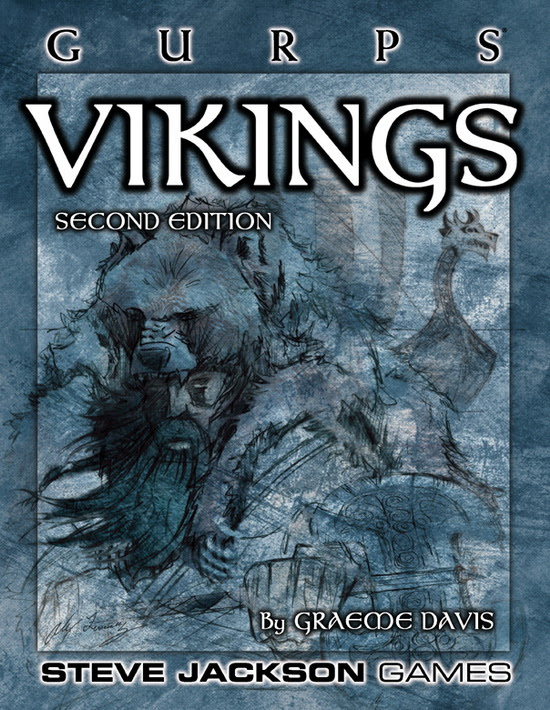 As you might expect, this book covers Vikings. Like any GURPS historical book, it covers the period with an eye to a) accuracy and b) using said accuracy for gaming. It also specifically covers inaccuracy, with a list of 10 viking myths (horned helmets, big axes, dragon heads on all of their ships, lawless, etc.) and how wrong they are (and a suggestion for using all of them for a silly campaign).

The book ranges from the beginning of the Viking age all the way to the end. It discusses the whole range - social mores of the various societies and their differences, social rank, trade, raiding, law, duels, honor, and more. It deals with both locals and how foreigners are treated. It covers the original pagan religions and their temples and beliefs, and Christianity, and how they interacted. There are Norse sames and nicknames, too. It's brief to list but everything is gone over in sufficient detail for immediate use in a game.

There are also some really nice maps - one big one, and one smaller one centered on Scandinavia. There is one depicting a hex-mapped steading, too, which can be blown up and printed out if you need one for a fight.

Suggested campaigns range from thoughtful, historical all the way to high-action mythic and everything in between. Nicely, several campaigns are suggested, both in story-arc fashion as well as shorter adventure seeds and nicely sandboxy setups - mythic troll wars and one of exploration especially.

- a naval travel section, with sufficient rules to deal with storms and travel times and travel difficulties.
- a legal framework for resolving a case before the Thing. Great for when you want the dice to decide how the Thing decides the case.
- details on the magical items of the gods in GURPS terms.
- cost and details on ships, complete with speeds in real-world terms (mph not knots, though, since mph convert to GURPS's yard-based scale more easily)
- cost for livestock and home items, too - important in a low-tech gift-heavy economy.
- 3e Mass Combat details for the troops. These will need some adaptation for 4e's Mass Combat.

There are a fair number of critters in it, too - including multiple Norse undead. Not just draugr, but also a number of other tomb guardians and discussion of sendings (a summon spirit sent to kill and/or haunt someone). There are also trolls and troll-wives, various spirits, giants, and the various legendary critters (Fenris, Jormungand, Garm, etc.) Normal creatures, including new world animals the Vikings may have met in Newfoundland, are also covered.

Any complaints? - The focus is squarely on Vikings, although - to me oddly, it doesn't cover Beowulf. I know Beowulf is an Anglo-Saxon story, but it's a story about Vikings, with classic literary examples of Norse honor and expectations, and about a hero fighting monsters and a dragon. If Beowulf doesn't fit in here, where would he go? Even more oddly, a movie based on a book based on Beowulf (The 13th Warrior, one of my favorites) is listed in the bibliography.

There is a weird bit of rules-error on two of the magic items, too - a reference to Fortify on a weapon (Shatterproof is for weapons, Fortify is for armor). A weapon with potentially more than Puissance +3 is there too, although +3 is the rules limit and it doesn't mention that's deliberately so.. I should have caught that in playtest, since I was a playtester and rules detail is supposedly my strong point.

Couldn't I just buy a history book? Yes, of course, but GURPS Vikings is written by a gamer for gaming. So the details really concentrate on what will matter to a player or GM in a Viking game. The book answers questions on trade, combat, exploration, society, honor, and what-not with an eye to playing. There is some coverage of basic history, but again, with an eye to gaming. So it's organized topically, and details that adventurers would find noteworthy are highlighted.

Even if you don't play GURPS, only a passing familiarity with it is enough to tell you what the rules mean, and give you a framework to hang your own rules over. If you can't use the storm table for naval travel or the status list showing the relative level of folks in society to one another without converting them, they are nonetheless there and easy to use for inspiration.

How is it for 4th edition? It's a fine sourcebook. You can use most of the monsters with minimal conversion - you'll want to drop their HT a bit and scale their ST to weight or lifting capacity instead of using 3e's much higher numbers. Or not, for supernatural types.

Is it worth $7.99? Yes, I think so. It's worth more than that if you're going to run a Viking game of any kind, and it's probably pretty much worth the cost just for having realistic Vikings in your game world. If you're doing that and running 3rd edition GURPS, it's a steal at the price. Recommended.

Looking for more reviews? I've got your reviews right here.
Posted by Peter D at 10:04 AM