What Trampier Meant to Me

By now you've certainly heard of the untimely death of David A. Trampier, artist of such works as this one:

Back in the heyday of D&D and Dragon Magazine, he was a major artist for the game.

He was very influential on my young mind, and the things he drew inspired me in my gaming from then on.

- Somewhere I have a handwritten set of stats for 1st edition GURPS for Barbadicus, Acchorath, and their double-bow toting buddy (whose name I forget). The PCs never ran into them, but I had them out there as bounty hunters.

- I'd turn to What's New? and Wormy! first when I got a new issue of Dragon. And the first thing I did when I bought the Dragon archive was to read the Wormy comics from start to eventual drift-off finish (since he'd fallen out with TSR and stop drawing the strip.)

- I even turned the cover image of the Player's Handbook into a set-piece encounter in my current Dungeon Fantasy game.

- And that Trampier picture of Emirikol the Chaotic burned into my head the moment I saw it. 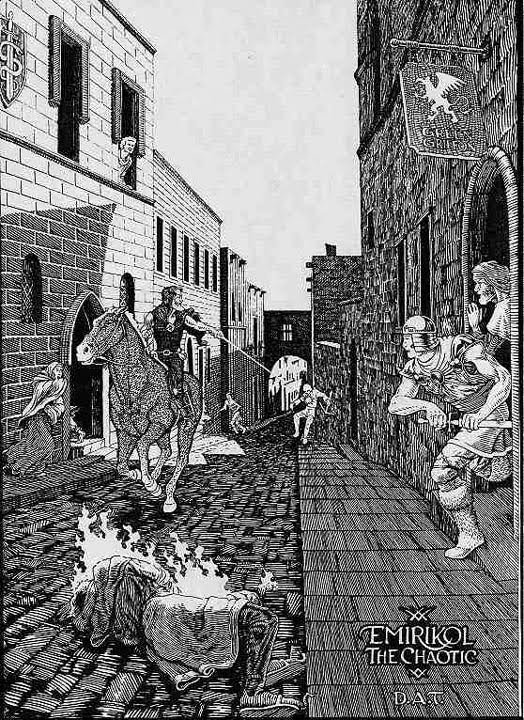 All that art signed "Tramp" or "DAT" - it was all so cool and so evocative. The work of Trampier, Erol Otus, Jeff Dee, and David C. Sutherland loomed huge in my young mind.

I'm sorry the man passed at all, nevermind so young. I'd say he'd be missed, but I've been missing him since he stopped doing D&D art all those years ago. It's just a sad mark at the end of the long wait hoping he'd decide to start drawing again.
Posted by Peter D at 7:05 AM

Email ThisBlogThis!Share to TwitterShare to FacebookShare to Pinterest
Labels: art