Way back in, I don't know, maybe the mid 1990s, my friend proposed a Champions game. I promptly loaned him all of my Champions stuff so he wouldn't need to buy it. We never played the game, despite much lobbying by the GM and myself (I wanted to run my hero, Martial Arts Guy!) The games followed my friend from house to house.

This past Sunday, I picked it all up. 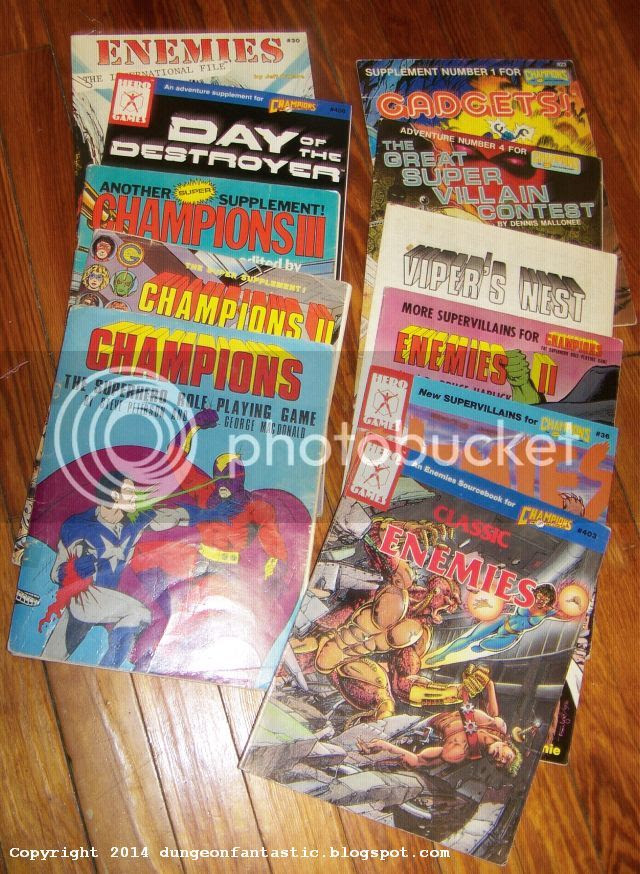 I can add that to my copy of Champions 4th edition, and my cousin's old copies of Champions III and Day of the Destroyer.

I have no idea where the character sheets from the Champions boxed set are, though. I may have loaned them to my buddy, may not have - probably not. He's extremely organized and all of the stuff was all together in one box and had been together for a long time.

Getting back my original Champions rulebook was really nice. Nostalgic, really - I still remember the guy at the game store at the mall explaining the idea of point-buy games to me. Man, I couldn't save up money for Champions fast enough.

I rarely got to play. I'm a terrible superhero GM. Just bad. I can read comics, and I can get into the mode in my head to play, but GM? No, sorry. But still, I'd love to have gotten to play it more. The combat system was a crawl, but a fun crawl.

I'm going to enjoy reading these books again.
Posted by Peter D at 8:11 AM

Email ThisBlogThis!Share to TwitterShare to FacebookShare to Pinterest
Labels: misc, other games