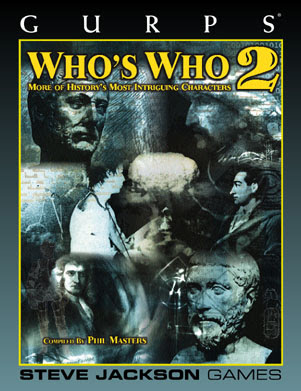 For this book I wrote or co-wrote:

It was a good excuse to read a lot of books about Sid, the Sex Pistols, and punk in general - and re-read the ones I had already (I highly recommend England's Dreaming.) Similarly research about Rommel, Nobunaga (who I'd first discovered thanks to stumbling across Koei's Nobunaga's Ambition PC game), Napoleon, and John Wesley Hardin was really enjoyable.

Who's Who 2 has one of my favorite pictures in any GURPS book - Sid Vicious. I was very proud to get him into a GURPS book, as I've long been a big Sex Pistols fan (although I honestly prefer their live stuff with Glen Matlock on bass.*) I only realized after he started playing with us that the art for his entry was done by andi jones. It was nice to thank the artist personally** for the work I'd long enjoyed.

I really love these two books.


* Although I enjoyed this show with Sid particularly, and this one is legendary.
** By words, and then by killing off many of his characters.
Posted by Peter D at 8:12 PM

Email ThisBlogThis!Share to TwitterShare to FacebookShare to Pinterest
Labels: GURPS, my books, writing