Yesterday in our Felltower campaign the PCs took their biggest step towards defeating the draugr since their first one back in 2013.

The PCs have tried to cheap a victory a few times here, but inevitably this failed because it's not a setup conducive to cheaping. The draugr aren't mindless, they're not programmed, and they're not restricted to their tomb area even if they clearly are reluctant to leave it.

Also, they're very tough - they aren't stock-standard draugr from DFM1. They're the picked elite bodyguard of Baron Sterick the Red, who clearly spent all of his time, effort, and money on his gear and those of his bodyguards and little on anything else. They're well equipped and chosen men from the veterans of Sterick's experienced forces.

On top of that, the PCs have been reluctant to use the area-effect attacks most conducive to dealing with desiccated undead - fire - because it's likely to reduce the value of the loot.

The draugr have a fair amount of loot by themselves - suits of mail (old-school Basic Set mail, sadly, not incredible valuable DFRPG mail), oversized axes, swords, and spears, plus golden necklaces. 33 gold necklaces alone will be a useful bit of loot.

One of the draugr, however, is more valuable. Long ago a Lord Venick offered a reward that's probably above-market for the grave goods of his ancestor.

That's caused the PCs to start thinking it's possible to sell these goods at above market. The PCs - led by Wyatt - plan to shop around the grave goods of the draugr, looking for other nobles who may be descended from the bodyguards. They figure they'd give a better price for their arms, armor, and treasures than the open market. I'm going to allow that, but it will mean:

- only the loot sold immediately counts for XP for loot thresholds;

- finding the nobles will take time, Research, general investigation, and reaction rolls - some of this will cost money;

- someone will need to be in charge of the stuff and of spending between-session time doing the finding and selling (which means less chances for study, new spells, new skills, etc.);

- dribs and drabs of loot over time.

So we'll see if they do that after all. It's an interesting and clever way to maximize the value of their loot, but it will come with a loss of convenience.

There was some joking about selling the thrown spears as antiques, but that would take a good Merchant or Fast-Talk roll, and it would just be color for why they got a higher price. People don't really collect antiques in this game.

The draugr cardboard figures that Emily Smirle made for me are great. I printed out 33 of them and gave them names and numbers, printed right on the counter. The names help. The players didn't "shoot at that guy" or "attack number 17" they "shot at Sven" or "attacked Ragner." It added a lot to the combat, even though it's not clear how anyone would actually know the names. But named foes are interesting.

You can see them in the shots below. 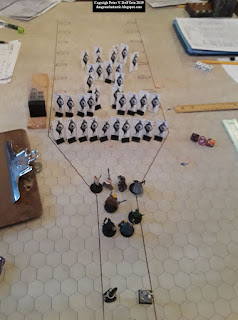 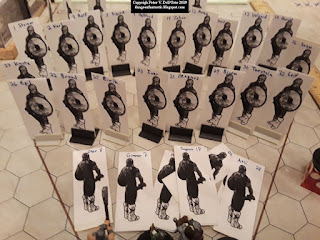 The PCs have amusingly tried taunting the draugr, on the assumption that they may be berserkers and will lose cohesion and attack if taunted.

First off, almost no one has the appropriate skills, and the ones that do lack significant skill levels in them.

Second, their taunts haven't really hit the mark. "Sterick is dead." Okay, prove that. Stuff that boils down to "fight like a man!" isn't really impressing guys who regard how they are specifically fighting as fighting like men. Especially, as is the case 100% of the time with PCs, the draugr are facing a mixed bag of opponents lavished soup-to-nuts with magic. It takes no brains to figure out the glowing shimmer in front of someone that deflects blows is Shield, the guys moving double-time have Great Haste, guys in heavy armor floating like butterflies and hacking through mail like it's yarnmail might have Might on them, etc. And the PCs won't hesitate to demand a "fair" fight and then define "fair" as whatever helps them this particular moment. You know, one-on-one until that's not working, to your death but not ours, if we win you give up everything but if we lose it's fair to change the deal. Not a lot of instances of Code of Honor in the group. So it's unclear why that seems like it would be a good taunt. It's been established by actual play in my game that adventurers are untrustworthy greedy murders and it takes a bit to convince people otherwise.

Also, these guys are northern seafaring barbarian types like Hjalmarr was - and come from a culture where taunting is an art. So it'll be hard to impress them with some truly basic taunts like, "You suck!" or "Your boss is dead!"

Finally, the taunts and goads about how they failed their job and their lord is dead because of it might hit home . . . if anyone had any proof of it. Sterick's armor, his head, his weapons, his grave goods . . . none of it. Hayden was there, but he's the only bona fide Slayer of Sterick in the group at the moment. The words of PCs who just showed up and heard this happened, even if the player was there when it did, inevitably ring hollow.

The draugr exhibited coordinated tactics. The players knew that would happen, but how would they coordinate?

They heard a few shouted commands, but they didn't know from whom (outside of the light radius) and they didn't always hear commands before the draugr took action.

"Maybe they're all just talking around their own table amongst themselves and you guys can't hear their discussions, just like you guys," suggested me.

The draugr did give commands, but honestly, sometimes it's an eye-roll moment when the players take 5 minutes to resolve a one-second action after everyone coordinates their plans and actions . . . but then they think something is fishy when the enemy manages coordination without giving away how they do it.

The draugr carefully formed ranks, threw spears, broke ranks to allow rear ranks through, and otherwise supported themselves. They used a tight line but spaced the lines to make Area and Explosive Missile spells much less effective.

Their ability to do this springs from their nature - the elite bodyguard of Baron Sterick the Red - which gives them solid Tactics scores.

But it's also something that I personally worked on. I play and have played a lot of wargames. I'm no tactical expert but I don't suck. A good chunk of that is spending time thinking about tactics and what would work or not work.

Even tactical axioms are situational. Yes, you want to keep a solid line most of the time . . . but sometimes a solid line won't help and might hinder you. It's helpful to force your foes into a bottleneck . . . but not so tight of one you can't leverage your own abilities due to lack of fighting space or in such a way as you can't force battle when you need to. The tactical defense is generally better but sometimes you can't find a way to fight on the tactical defense or make someone walk into your trap. Knowing what to do takes actual real-world study and thought. Not everyone has the time or interest, but it's worth it if you also want to play a game where those decisions will matter.
Posted by Peter D at 7:52 PM