Today and tomorrow I'm going to talk a little about what I call "Adventuring Mistakes."

These are mistakes that players make that disrupt the accomplishment of their goals.

I discuss them mostly from a megadungeon perspective, or a limited sandbox perspective, where you have a choose-your-own-goal approach to play. A more mission-oriented game might not allow for this to happen, or give you such built-in focus that it's hard to get pulled out of the overall plan. You might get tactically distracted, but you're less likely to get distracted from the main goal of the day's delving.

Obligatory "Wrong, these aren't mistakes" pre-response: Anything that doesn't accomplish what you're trying to do, or actively undermines what you're trying to do, is a mistake in my book. It might be chosen deliberately, it might be fun, but it also might mean that you don't accomplish your stated and intended goals and miss out on more fun regardless of your intention either way.

With that out of the way, let's go make some mistakes.

Sometimes called "Adventurer ADD," or some similar construction, this is the mistake of letting every side issue pull you out of your planned delve. Instead of accomplishing your goal, you get lost in a seemingly never-ending series of distractions, each pulling you away from what you're really after. 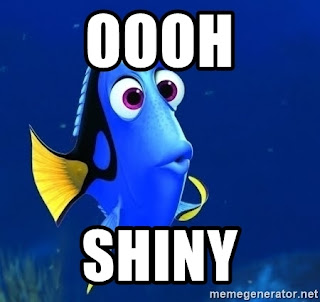 How far back does the issue of getting distracted go?

"some firm objective should be established and then adhered to as strongly as possible."
Gary Gygax, "Successful Adventures," AD&D Players Handbook, p. 107

You don't give advice like that because everyone is always keeping to their plans with hard-nosed rigidity.

What kind of behavior do you see with Oooh Shiney?

It's usually one or more of these types of things, all done despite a plan that specifically involves doing none of them.

- let's chase down those fleeing wandering monsters (or fight them in the first place, often enough, because "they might have treasure!")

- let's run away from that monster to this new area

- let's check this one thing out real quick on the way

In other words, you have a plan, but then let yourself get pulled out of the plan to do some other thing that seems attractive or interesting. Or, often enough, easier than the plan itself. This is especially the case if you've chosen a plan despite a lack of enthusiasm for it, or because you couldn't think of anything else, or somehow hoping something better would come along. It's grasping at a straw of convenience because you didn't want to go through with your plan in the first place.

It can also be something that disrupts a good, solid plan that you really do want to follow through on. You can just get yourself distracted by something that seems like it must be done right now.

This can often take the form of combat, too - getting into a fight can solve a lot of questions about "what next?" and what to do right now, as well. It provides relief from the decision-making process that following through on a plan often requires.

The inability to follow through on a plan isn't in and of itself a failure to adventure. However, it can mean:

- wasted time planning (you spend 45 minutes talking it out, which isn't spent playing, and you don't follow through anyway.)

- wasted resource acquisition - you bought and brought stuff that isn't going to be needed because you didn't stick the plan out.

- lack of resource acquisition for the next task - lack of rations for a side trip that might call for them, lack of purchasable magic that is needed for a new plan, etc.

- inefficient adventuring, especially if you have a series of tasks you need to accomplish.

How do you know you do this?

Looking back at your delves, how often do you have a plan and follow through, at least to a degree?

How easily are you distracted from an ongoing task with a new task?

Getting pulled from Task A to Opportunity Task B isn't a bad thing, if B is something you may have wanted to accomplish in the first place had you given it some thought. Sometimes opportunity knocks, and you have to answer right now if you want to reap the benefits.

But if you find that opportunity is always knocking, or you're depending on it knocking, or assuming it's knocking whenever something new comes along . . . you might be making the "Oooh, shiney!" mistake.

Tomorrow: Clearly, getting distracted is a problem. So let's go to the other extreme! The natural opposite to Oooh Shiny: Stay on target! 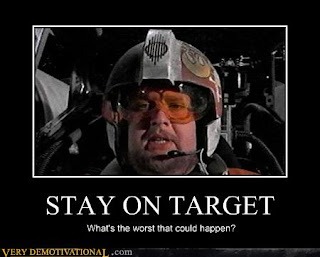