I looked at some of this video of Doug's, showing Foundry VTT support for his new monsters. Pretty neat:

But I keep thinking . . . I play a number of things not by the book. I play a lot of monsters off of variants. I have rules that aren't in any books at all.

The more computer support I get, the more I need to fight with the computer to make it do what I want it to do.

What I really need for a VTT isn't really tight integrated rules support.

- easy addition and scaling of maps

- a solid random rolling system that doesn't give Roll20 bullshit like these rolls from Aldwyn last session: 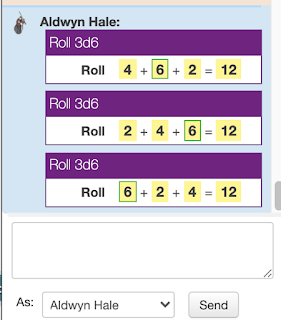 (Seriously, look at that. Three rolls with three dice all the same - just column shifted.)

I don't really want a computer game where I'm the GM, so much as a set of tools that just let me execute what I'm doing.

More than anything, I miss playing on the tabletop. The tools that would let me do that while taking advantage of cut-and-past monster replication, map uploads, and fog of war would be awesome. And yet the things I see that do the job better than Roll20 also integrate the rules "better," which isn't really a big help.

I might be asking for too much by asking for less. But I'm not really sure. It's why I hate Roll20 at this point but I don't seem to be in a big hurry to spend time digging into a new VTT. I will look closer at Foundry . . . but my desires are for something that is probably not around to be found.
Posted by Peter D at 9:35 PM