Last night I received my copy of the Blackbirds RPG. 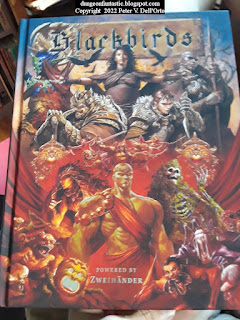 It also came with an ad and a sticker. 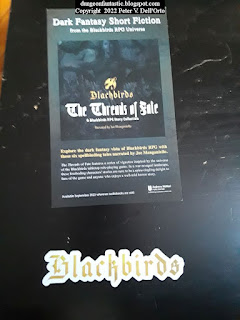 The lead designer is my old gaming buddy Ryan Verniere. Oddly, Ryan took longer to write an RPG book than me. That might seem like false modesty, but it's not - Ryan is very creative, and I'm a bit more of a rules person. He did spend a lot of intervening years doing creative real work, though, so we can let him slide a bit. The important bit is that the book is here.

I feel a lot of pride having books written by my friends on my bookshelves - especially those who were my friends long before we wrote professionally. I won't lie - I'm disappointed that Ryan's name isn't on the spine or cover. He's got a very small billing inside as Lead Designer. Above everyone else's billing, true, but still. Name on the cover or name on the spine is just a lot cooler to look at. 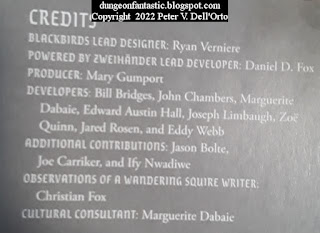 I'll read it as soon as I can - I'm mid-book on a few books I need to read for non-gaming purposes - and post a full review. For now, it's beautiful and my friend was the lead designer.