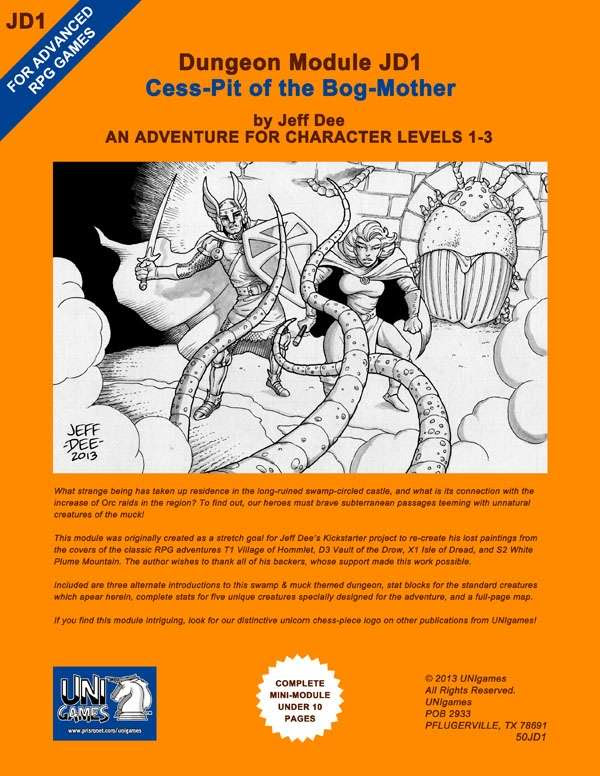 This adventure is written by Jeff Dee, better known for his art and for Villains & Vigilantes.
I got mine "free" as a Kickstarter reward - free because I was in at a good enough level and the rest of the folks chipped in enough to get this nice bonus item. But it's also up for sale on RPG Now.

The adventure basically consists of a small tunnel system under a ruined in a coastal swamp. It's occupied by some typical low-level humanoid foes and, as a boss monster, the titular bog-mother. There are also a few new bog-themed monsters.

It's a forked map, but it's a series of linear forks. It's pretty easy to ensure you don't miss much but you do get some meaningful choices.

The theme holds together well, so you really feel like the monsters belong in this ruin together.

It is way too generous with treasure for its challenge. The challenge isn't much greater than other level 1-3 dungeons but the loot is, in my opinion, too much. The consolation to that is the limit of 1 level gain in D&D clones (leaving you 1 xp short of a 2-level gain), so even with that big pile you won't get too far. But it will allow a much more lavishly equipped subsequent trip, or even a large group to go in and level up despite being able to overwhelm the challenges. Refs might want to dial it down or dial up the monsters.

Overall, though, it's a pretty good adventure. There are also some really cool new pictures by Jeff Dee, and the various monsters come with a clear snapshot of the minis based on them/they are based on, even if said minis seem to be out-of-production.

How is it for GURPS? - Like any other OSR adventure, it's just a question of how comfortable you are converting. The descriptions of the new monsters are clear enough, and the pictures useful enough, to make designing a GURPS version not too difficult. The environment is discussed in enough relevant detail to make assigning HP, DR, and material HT pretty easy, too. It wouldn't be hard to turn it into an adventure suitable for some DF15-inspired "low level" adventurers, or to up-gun it for standard DF.


Is it worth $2.50? That depends, do you need a short pre-made swamp-themed adventure with some new monsters? It's worth $2.50. Do you need some new swamp monsters that your players haven't seen before? Worth it.
Posted by Peter D at 9:28 AM