I'm re-reading a book I really liked the first time I read it:

Dividing the Spoils: The War for Alexander the Great's Empire 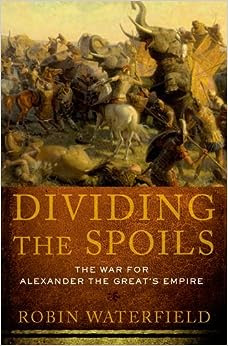 There is a lot to recommend it, not the least of which is it is short, readable, stays on topic, and covers a fascinating time period.

But it also has perspective for GMs who worry about the amount of loot seized by adventurers.

"Alexander the Great had looted, or liberated, something in the region of five thousand tons of bullion from the Achaemenid empire - comparable the the weight of all of the gold stored in Fort Knox - and a great deal of this was turned into coin."
- Robin Waterfield, "Dividing the Spoils," p. 166

That's at the start of a section that explains why coins - gold, silver, and bronze - were used . . . because if everyone is in on the cash economy, it's easier to tax them. And then use those taxes to raise, train, and pay soldiers, of course. Another part of the book has 40,000 foot and 5,000 cavalrymen costing their leader 2,500 talents of silver a year. That's not pocket change.

The money needed to fund an army, well, it makes adventurer's dragon hoards look like freaking peanuts.
Posted by Peter D at 2:28 PM