Douglas Cole posted about this yesterday.

So this is my go.

Like Doug, I want in on a game of this. I've read the Starter Set and the free rules, and I'm impressed. It looks a lot like how I'd have liked AD&D to run back in the day, and what I'd have liked 3.x to be.

Sadly the only people who invited me in run games on Mondays, and Monday nights I have clients who never, never miss sessions, so that day is out.

I could conceivably run this game, but I don't have time to run another campaign with a rule set I'm new to. I'd like to play it first.

I'd really like to get in on a GURPS Action game.

This is something I could start up easily, but I couldn't run easily. I'm just not that good at episodic play and paced action. I don't really know how to set it all up and keep it interesting and flowing. But man, I'd love to play in a game run by someone who gets those things. Not a really tight game - not an Action-inspired modern gritty but high powered game. No, explosions and kung fu and fast cars and one liners. That would be awesome.

The old one, from Victory games. 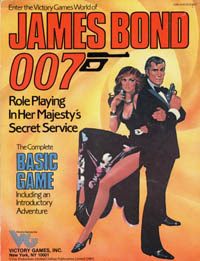 I've read the game many times, but I never really got a handle on the difficulty bidding system, or how to really structure an adventure so it flows like a Bond movie. I know Sean "Dr. Kromm" Punch used to run this game, and AFAIK that's where "Dr. Kromm" made his first appearance.

But the game is very attractive, and I know from hearing about how it played that it was a fast and good system. I'd be way into that. I know that what I understood of the system made it seem like a lot of fun. It would be fun to confound Bond villains and meet with "Q" and get cool gadgets and all of that. But it's not a game I could run effectively myself. I feel the same about superhero games - I can get my head into that space, but not construct it.

And those are the three RPGs I'd like to play sometime.