Orcs vs. powerful PCs: Fighting back when you can't win

In my DF game, the PCs are dealing with a persistent and dangerous orc problem that appears in regular (but expanding) areas.

If you turn it around, the Felltower orcs are dealing with a persistent and dangerous delver problem that appears in irregular, seemingly random patterns.

Both sides, I'm sure, see the other as having violated the working agreement they had - the PCs see the orcs as having raised the cost of entering the dungeon and thus getting too big for their britches, the orcs almost certainly figured out the PCs killed any orcs they found in areas they were exploring. But recently this has become an active conflict in the dungeon, with the orcs getting the short end of every face-to-face encounter.

So what have the orcs done?

Setting aside individual tactics (which I covered as extensively as I could in this Melee Academy entry), they have tried:

- ganging up on individual fighters.

- mixing troop types (so some guys with long weapons, some short, some ranged, etc.)

- a solid alarm system, with pickets out and delaying tactics.

- Piling on when they have an advantage, backing off when they don't.

- Magic to (literally) shape the battlefield.

- Riling up the dungeon inhabitants against the PCs.

- occasional monster deployment (mostly their own wolf-like pets, but recently a troll.)

- barriers and blockades to channel the PCs.

- special weapons - so far, flaming oil (a bust, mostly, thanks to the PCs liberal use of magical counters), smoke (a bust, thanks again to magic), foot traps (caltrops, spikes, rocks, etc., also a bust), and a few other minor ones. Nothing so far has impressed the PCs (since they're quick to think of and deploy counters.)

- magic, mostly indirectly since direct magical attacks on PCs have utterly failed the few times they were tried. 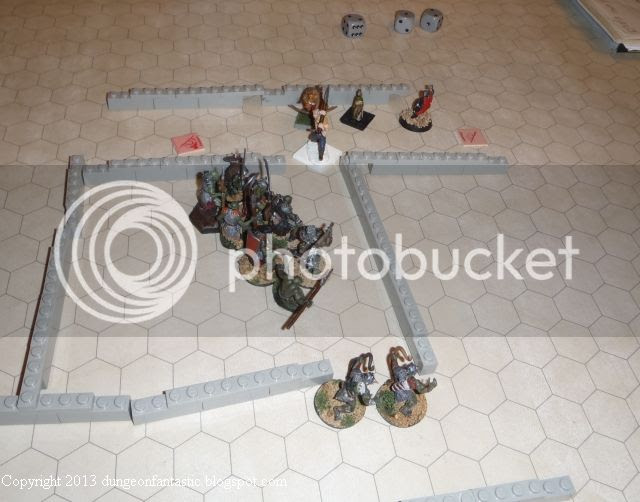 These guys tried a formation. It didn't help.

These guys brought friends, which backed off the PCs but didn't get them much else.

Of course, the orcs being orcs, they are already poisoning their weapons. That's a given - my orcs are quite resistant to poison, so a safe dose for them is still a combat-worthy amount of venom against a human.

Some of this is shades of "Tucker's Kobolds," - but it's been a progressive reaction to the failure of prior tactics to beat the PCs or even dissuade them from action. Not only that, it's a militaristic/warrior culture who are dealing with foes out-fighting them. They're outclassed but they have a vested interest in beating the PCs and being able to keep the PCs from steamrolling them.

As tactics are put in play, they're learning from what worked, what didn't work, and what might been to be changed. So it's not just a case of running into a wall of pre-made killer commandos, but rather dealing with a reactive foe trying to adjust to the changing tactics and escalating threat of the PCs. The orcs don't always react correctly, but they'll do something. The players know this - they recently said something like "We cleared this section for the orcs, so we better go through now before they come and set up here." It doesn't help the orcs any that the PCs take the orc threat seriously, and fight back hard and quickly when conflict happens.

In a way, you have to kind of feel for the poor guys - the PCs came through last time and turned a well-designed ambush into a death trap for around 25 orcs and a troll without taking any significant long-term losses. But they keep trying, which might tell you something right there . . . the answer to why isn't just "because Peter owns a pile of orc figures." That only says why it is orcs, not something else.
Posted by Peter D at 9:12 AM