Years back, my players plunked down some change on some minis for me - some skeletons, and these guys - pig face orcs.* The skeletons and these orcs were made by Dwarven Forge, back in the day.

As you can see, I re-based them. I used hollowed out slotta-bases, inverted to what I call a cup base, filled with glue, green stuff, and other filler material. Then I topped them with glue and put on flock.


I use these guys a lot, but honestly, as much as my players forked out for them (they used to run to $12.99 for a pack of 3!), even on sale, they're kind of bad minis. They are attractive, and well-painted for pre-paints. But they are resin, and break fairly easily. 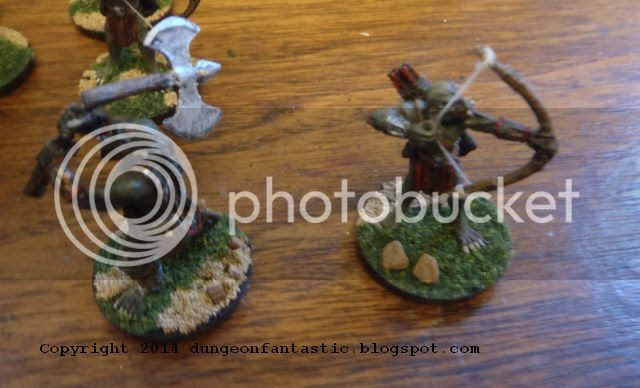 I need to try to glue the arrow back onto the archer, but it's not critical. Even without the arrow, the mini is okay.

Without the axe, though, the greataxe guy is useless. I'm not sure if I want to snap that off and try to re-bore his hands or glue the axe back on. Superglue does a poor job here, and I'm not sure how resin and epoxy mix. Does anyone reading this have experience gluing hard resin minis like this?

Any protruding spiky bits tend to break in transit. It doesn't matter how good the minis are - I have some beautiful ones, well made, but spear tips made of pewter just snap off. These resin minis, though, have some serious shatter potential. They're hard but brittle.

So I'm not sure what I want to do with this guy. Maybe swap the useless greataxe for a flail? It's rare for me to even deploy a greataxe orc, because it's a poor weapon choice for them. An orc with a greataxe is just arrow fodder. An orc with a two-handed flail is arrow fodder, too, but at least if he gets a swing he's got a chance against a serious foe. Plus, I have a much, much better metal orc with a greataxe, who both looks more intimidating and better armored. So if I need one, I'm covered.

* Also a horde of Foundry pirates, which might need a "pirates I've painted" post of their own.
Posted by Peter D at 9:41 AM