This guy gave the PCs a pretty rough patch: 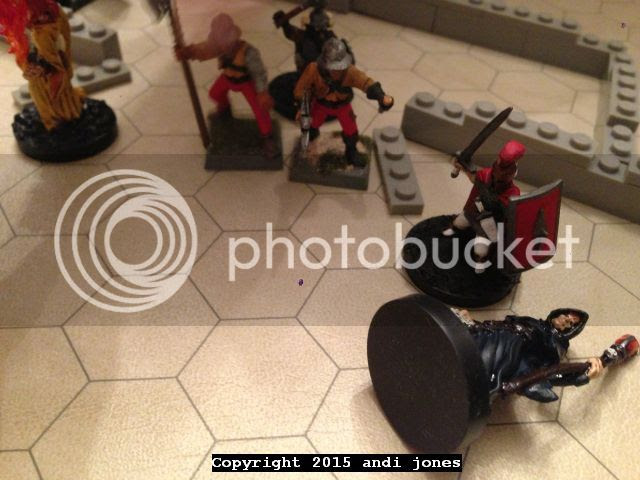 That's him, lording it up over a fallen, ambushed Gerry.

I'm pretty sure, by the time this guy flew up to engage the PCs in Cold Fens 1 while Great Hasted, the player had elevated him to #1 threat. By Cold Fens 2 Part II, I think he'd gotten elevated to a death machine in plate, with DR 10-12+, massive skills, a raft of advantages, and so on. It doesn't hurt that I've used that mini before, but only for pretty tough special NPCs.

In the interest of him not being elevated in death into some kind of unstoppable super-zombie spoiled by a double leg chop, or a knight worthy of a massive party takedown, or the now-dead heart of the bandit force, without whom they are a shattered, empty shell, I figured I'd post him up here. He's basically a boosted-up Squire from DF15, with extra points on top to make him a worthy solo fighter.

Anyway, here are his stats, straight up. In the first fight, he used his potion, and had Great Haste. In the second, he didn't have any buffs that came up in the fight, but still used his Gem of Healing (which he'd kept in his left hand.)

He's done up with the newest version of my combat writeup, so he doesn't have his skills and stats and disads listed. I played Arnegar as if he had mild Overconfidence, though.

He's good, but he was at best a one-on-one worthy foe. Not a boss. Not a match for either of the front line fighters heads-up. He benefited from a couple of great rolls in the first session. He also fought with a pretty careful approach - mostly swings to the body, Deceptive Attack -1 (for a net 15, risking slightly more critical failures) or Deceptive Attack -2 (for a net 13). He stabbed Gerry with an All-Out Attack (Long), which was risky, but let him strike without putting himself into a bad spot. He mostly made his defense rolls, although not always. He also paid horribly in both sessions with a timely "3" from Bjorn. In the first, that was nearly enough to take him out ( but he got his own timely roll to stay awake and unstunned.) In the second session, that was enough to make him permanently combat-ineffective.

I also made sure to deploy him - after that desperate blocking move in the first session - alongside compatriots. He ambushed the group in the second combat, but only had to hold off people on his own for a short time. It would have been even shorter if not for Hannibal's Smoke spell disrupting the charge. Being a pretty tough fighter backed by allies made him much tougher to kill.

I just figured everyone would like to see the stats of the guy who was able to put up such a good fight. Feel free to use him and his stats for your own.
Posted by Peter D at 11:36 AM