I saw this article linked over at Akratic Wizardry. I rarely post about fiction here, because this is my RPG blog - it's got to have some immediate and direct connection to gaming, like detailing a cool dungeon or, better yet, having a game book attached to it. This post has that.

It's about Gene Wolfe, know for his New Sun books and the Latro books (I know of two.)

Shadow of the Torturer is a book I remember starting, and then halting, and then re-starting. I brought a set of the series with me to Japan, since I found it much easier to concentrate on dense works when I surrounded by a non-English language. To this day when I think of scenes from "New Sun" I have them connected to vivid memories of certain places in Japan - reading in my apartment, reading while waiting for a train in Aizuwakamatsu, reading while sitting in school between classes. I wouldn't read the fourth book in the series until I returned to America, when I was able to track it down. I'd shortly after pick up the Latro books, and enjoy them as well.

I didn't find those books by chance, though.

I wouldn't have picked these books up, or persisted in them, if it wasn't for GURPS New Sun. I read that book back in 1999, but I couldn't make heads or tails of it. But it provided a useful incentive to read the New Sun books. I'm a credited playtester on the book, mostly due to just relentless reading and rules checking. I didn't know the New Sun, or Gene Wolfe, at all when I did that. My role was just making sure the implementation was sound.* 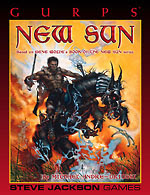 GURPS is precisely the right system to express what's encountered in the New Sun series. It's probably an odd place to play a game, given the very closed nature of the story. But the spooky, creepy, and unsettling elements of the story (such as the alzebo and the notules) are there in GURPS terms to port elsewhere. The stylish elements (Terminus Est, the Torturer's Grip, the odd high-tech gear) are ready to steal as well.

GURPS New Sun is one of the few 3e books I keep out and ready on my scarce shelf space. It's something I will suddenly feel inspired to pull down and look at, just like my copies of the Wolfe books.

So go read that article. And if you haven't, take the time to read the deeply fascinating New Sun books. You may not love them, but you're unlikely to regret giving them a go.


* Something I did for Planet of Adventure, too, which meant I read the whole series with an odd sense of deja vue. It's often extremely useful to have someone familiar with the rules but not with the material, because you simply read what's there without preconceptions of what you think it implies.
Posted by Peter D at 8:28 AM