I've been playing GURPS since Man-to-Man. Some of my group has, too. And for many of them, most of their formative experience was in the 3e era. So we have a lot of 3e-isms that have survived. These serve mostly to grate on the ears of the GM and confuse new players. 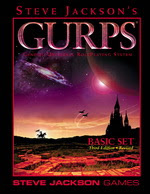 No, it doesn't. It gives you +3 DB (Defense Bonus). 4e ditched Passive Defense, for a lot of sound reasons. Although it does have some odd effects (a berserker with a large shield isn't any harder to hit, and the shield never gets in the way) it's a generally good change. But my players love the term PD.

I cast off of health.

My players say this one all of the time. "I cast off of HT." They mean, "I cast a spell fueled by my HP" and back in 1e-3e GURPS, HP were derived from (and generally equal to, for human-like PCs) HT. Just once, I want to let them. Sure, you can cast off of HT. Spend 3 HT and make your roll. Your wizard's HT just went from 11 to 8. Have fun with that death check later in the fight.

You can learn the Feint maneuver.

Technique. They're called Techniques, because having two different things called Maneuvers was tough. But many times "maneuver" just comes out.

Does Strong Will add to consciousness rolls?

This hasn't come up recently, but it used to come up a lot. Back in 3e, Will was equal to IQ and the only way to improve it was the Strong Will advantage. That also added to rolls to stay conscious. 4e made Will a derived stat and got rid of Strong Will (and Weak Will) and just lets you mess around with the level of that stat directly. As a side effect, your strength of Will doesn't affect consciousness rolls. I've had people argue those rolls should either be influenced by your Will, or floated to Will instead of HT. That might be interesting, but it would require mucking around with a lot of other things (Hard to Subdue costing, HT costs, why it's a good idea to let you float a roll from a 10 point attribute to a 5 point secondary characteristic). In any case, it's a 3e question.

Make a Will roll to avoid going berserk.


An honorable mention goes to, "It was that way back in 3e, but they changed it." Why? Because that's not always true. Sometimes it was never changed at all, and people just remember it wrong. Or they're remembering a house rule (that came up recently with Tip Slash - someone mentioned it was overpowered and we'd house ruled it. Yes, we did . . . but the way we ran it became the official, by the book way to run it.) Or things that aren't true now, and were never true.

None of this stuff really impacts play - it's just old holdover language. But it's interesting to see how

Any 3e isms that have crept into the conversations around your 4th edition GURPS table?
Posted by Peter D at 9:45 AM

Email ThisBlogThis!Share to TwitterShare to FacebookShare to Pinterest
Labels: GURPS