We found our henchmen in the dungeon

So it looks the PCs found yet another NPC co-adventurer in the dungeon.

The line in my campaign isn't very deep, but it's significant. Raggi Ragnarsson was saved from gnolls, Korric and Orrie from hobgoblins, a bunch of hobgoblins dragooned after their defeat (and one freed from petrification), and some orcs were taken on temporarily as part of a deal.

Many more hirelings were brought in from town, of course.

But still, there is something special about hirelings you find during the adventure. Foes you beat and recruit, prisoners you rescue and then arm to your cause.

We've got one more.

The PCs mauled a bunch of magically charmed pirates and kept one alive because Hjalmarr and Mo are both significantly less ruthless when it comes to killing women.

I ruled that Xian, the pirate woman - sole survivor of the bunch Enslaved by Rangol Grot - would be pretty grateful if freed from her magical charm.

(Mini picture behind the cut) 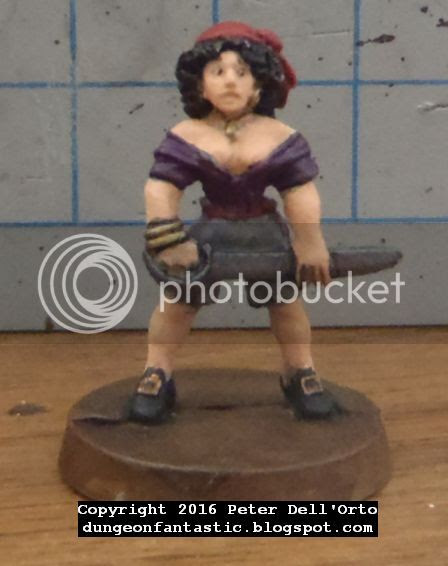 (Mini is a Eureka pirate)

It's not like she'll forget being magically compelled, after all. So her reaction roll will get a staggering +5 to it for that - saving her life, freeing her, etc. adds up to a lot. Mo is most interested in keeping her around, and they both share an overlapping Social Stigma (Minority Group), turning the -2 to a +2. And he's Attractive (a prereq for his Beefcake Protection), for another +1. So 3d+8 for a reaction roll? 50% of the time it's Excellent (19 or better) and that bodes well for her Loyalty roll, too.

Mo's player is considering dropping a point to get her from "hireling" to Ally. That would incidentally bump her up about 7 points, too, as she'd stay at 25% of his point score and not just float around the 50-60 points she is now. She'd be very fragile, of course, but she's a 1 point Ally. What do you expect for 1/331th of Mo's total spent points?

In any case, I'm a big fan of "beat them, talk to them, offer them swords in your service." It's too bad they butchered the lot of them. They made useful zombies if you've got a Necromancer, but they'll just meatshields at that point. They don't come with a lot of personality and the feeling of growing an army and your PC coming up in the world. They're just more fodder for the fight.

Yeah, they're something special.
Posted by Peter D at 9:30 AM