I'm not sure if andi intended for us to react this way, but we decided to make this our new base. It was a logical jump. I asked, "Are we going to leave this intact?" (Meaning, or strip it for useable stuff?) and someone said, "We should at least take a few medical androids with us." It took about a microsecond for us to go from there to the logical end of "Why don't we bring our stuff here?"

So we're going to move in.

They probably left when we whupped on them and their leader, but if not, we're going to swing by and try to find any Badders that live in the area and try to make peace with them. If that works, we'll have secured our interior a little better without any real cost, and hopefully set a precedent as a pan-sapient friendly area. That'll be a good contrast to:

- the mutant animal Napoleonists
- the humanoids-only Iron Men
- the pacifistic Triumvirate (they are friends, but we're not pacifists)
- the human and android Alt-Purists.

Our two big concerns are food and arms. We have nice guns now, but we tend to put like 100 rounds downrange even in a short fight, and we'll run low. The Bunker has more when we let our friends out, but it's not unlimited, and it is unlikely to have full reloading facilities. We need to work on replacement ammo or finding better guns.

And as always, establishing a food supply will be needed before we can raise an army.

Our plan right now is to:

- take care of housekeeping with Mike Mike. Mike, hey, want to move? If not, just an update that we did.

- Check on the Badders.

- Move to the Robot Farm and see if we can hook up with them in a positive way.

After that, we need to start worrying about our neighbors. So trips to our local towns (Jackson, Lansing) and a nearby free city (Angel Hill). We think Staff Sgt "Newb" Neidermeyer is there, probably, if only because it's on the way to the nuked-out shell of Detroit. We'll need to step in and absorb those other 20th Homelanders into our group and negotiate with the locals. 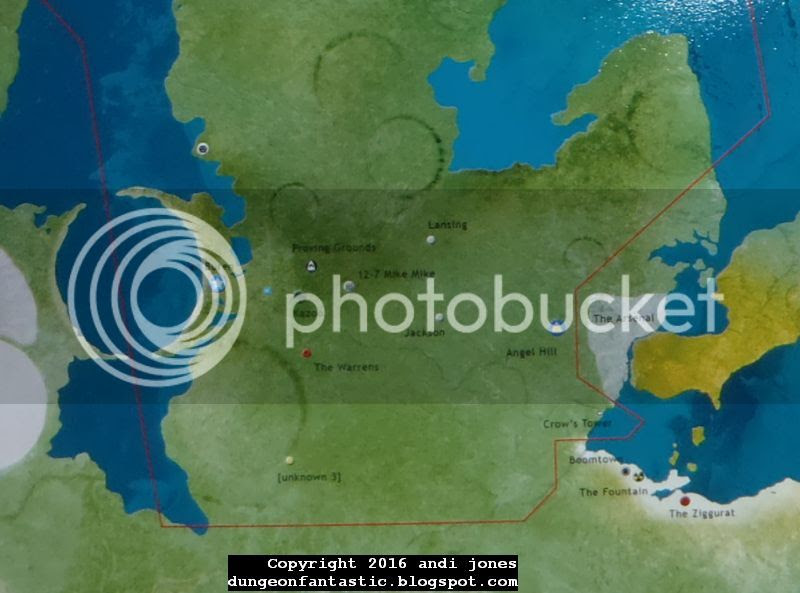 Also, we'll need to meet the Napoleonists (they might have another name, I'm trying to not confuse it with my out-of-game memorization of Gamma World books) and the Purists, who almost certainly have representatives there. We need to establish a relationship with them - maybe a non-aggression pact for a year or two? We also need to gauge who is stronger, so we can work against them. We have very little actual strength right now. We may need to make nice-nice with bribes, offers to get some work done for them (iffy), distract them with good diplomacy and outside problems, etc. With Warbot and our firepower we can trash a moderate-sized expeditionary force, so perhaps we need an offer backed with a show of force if they don't take the offer.