A while back I wrote a "Felltower in 11 Numbers" post to sum up 25 sessions of gaming. I did another post about the meta-stats of the campaign.

How about now, after 84 sessions and 57 delves into Felltower? I've updated it.

You can find the main links here for my GURPS Dungeon Fantasy megadungeon game known as Felltower. 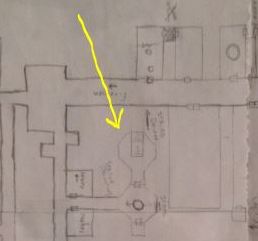 My megadungeon, in 11 numbers:

9 - different levels or sub-levels visited (even if only briefly), including the surface ruins.

Number of monsters slain and amount of loot retrieved? It was too hard to count, but plenty of monsters have been put down and enough loot has been garnered to keep them coming back.

And just for reading this far, here is a Felltower bonus - I guess this is the place that heals the PCs in town.
Posted by Peter D at 11:12 AM