Okay, not actually Conan - but I bought a three-pack of barbarians just for this one guy because I think he looks like Conan.

They're prepped and mounted as is typical for me:

- inverted slotted base with the slot carved out with an x-acto knife just enough to wedge in the mini.

- super-glued down, then the base is filled with white glue and let dry.

- Once glue dries the base is covered with Golden Coarse Pumice Gel to a uniform depth. 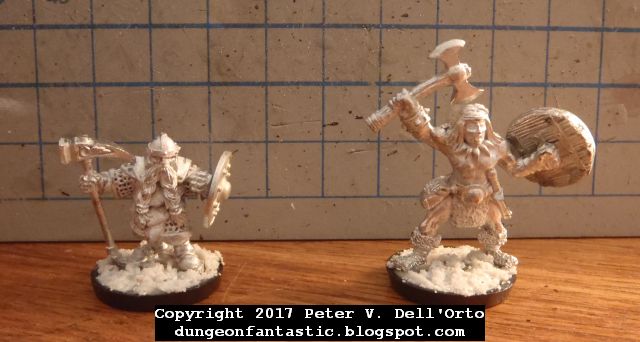 The dwarf on the left is from Iron Hills Dwarves II, and the barbarian on the right is from Elite Barbarian Raiders II

The axe on the barbarian is pretty thick - more than I like - but it's sturdy. I was considering up-arming the dwarf, but the sculpt is pretty tight so it's hard to find a good place to hand a crossbow, box of bolts, and a backup weapon, but he seems like that sort - "Yes, I have a two-handed weapon and a shield. And a sword. And a knife. And a crossbow. And if that doesn't work, check out these stompin' boots!" Oh well. As is he's battlefield ready. His shield is a Reaper Weapon Pack shield that I thought just looked nicer than the one he came with.
Posted by Peter D at 12:02 PM