I re-organized my module collection this week, mostly because it had gotten out of hand in how out of order it was.

I think this is the item I have the most copies of: 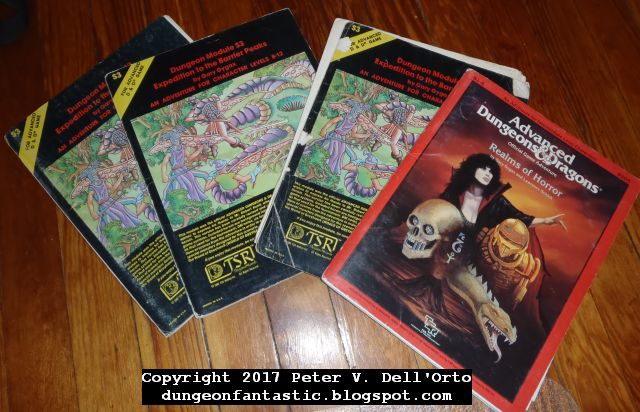 I have three copies each of S1, S2, and S4, but that's two discrete copies and one in the collection. I'm pretty sure I have three copies of B2, only one especially intact (that one is mint, and a reprint). I have three of A3. I have duplicates of all of the As and the original and combined Ds and Gs, a couple copies of Q1, two copies of T1-4, maybe some more. Unlike my hardback AD&D books, I didn't ditch all but one copy.

But S3, yeah, that's the most. And I gave away a copy, as well - it was four discrete copies and the S1-4 compilation version. It could have been five but I passed up a copy because, well, I had so many already.

I'm not sure why this happened - I probably inherited some in collections on top of the one I had since 5th grade sometime.

Fun adventure, though, even if read it more than played it . . . if only because every DM in I grew up around insisted you couldn't have any of the weapons from it so the adventure "didn't count," which pushed down the enthusiasm. Ah, the good old days.

It would work easily with DF and GURPS, though - just assign weapons from Ultra-Tech to the various implements, laugh as people do 3d to robots and have the strikes bounce off, and enjoy. Hmm . . . I've mentioned that before . . . seriously, AD&D can do tech-and-magic, but GURPS natively does tech-and-magic. And rolls to see if you figure it out, even when the players say, "I just point and pull the trigger, it should be totally obvious to my TL3 guy how alien weapons work!" Roll, roll, roll, oops, you fail by 10+. Heh.